Yue stoneware box with a phoenix 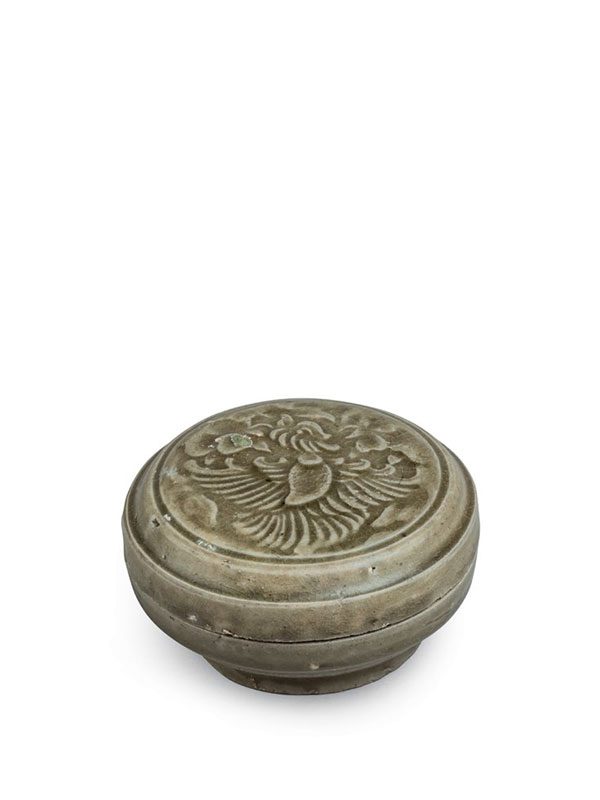 A stoneware box of circular form, supported on a short, splayed foot. The straight sides taper towards the slightly domed cover. The top is deeply carved with a central design of a phoenix flying among flowers. The phoenix is depicted in detail with a pointed beak, spread wings and a bushy tail. Both the interior and the exterior of the box are entirely covered in a translucent green glaze, which pools to a slightly darker tint in the recesses, leaving only the rims unglazed and revealing the greyish stoneware body. The base has clusters of kiln grit adhering.

This exquisite stoneware box is a fine example of later yue wares that were produced between the Five Dynasties and the Northern Song dynasty. Although these still have many characteristics in common with their predecessors, such as the greyish body and the production methods,[1] later yue wares tend to have a darker glaze. A closely comparable yue stoneware box impressed with a phoenix among flowers and dated to the Northern Song dynasty was excavated from Shanmen county in Zhejiang province in 1986, and is now in the collection of the Shanmen County Museum. [2] A yue stoneware box carved with two mandarin ducks, dated earlier to the 9th century, is in the Sir Herbert Ingram collection at the Ashmolean Museum in Oxford. [3] A Northern Song yue box covered with light yellowish-green glaze and carved with a three-clawed dragon on the cover, excavated at Shifuzhai village at Yiwu city, is now in the Yiwu Museum in Zhejiang province. [4]