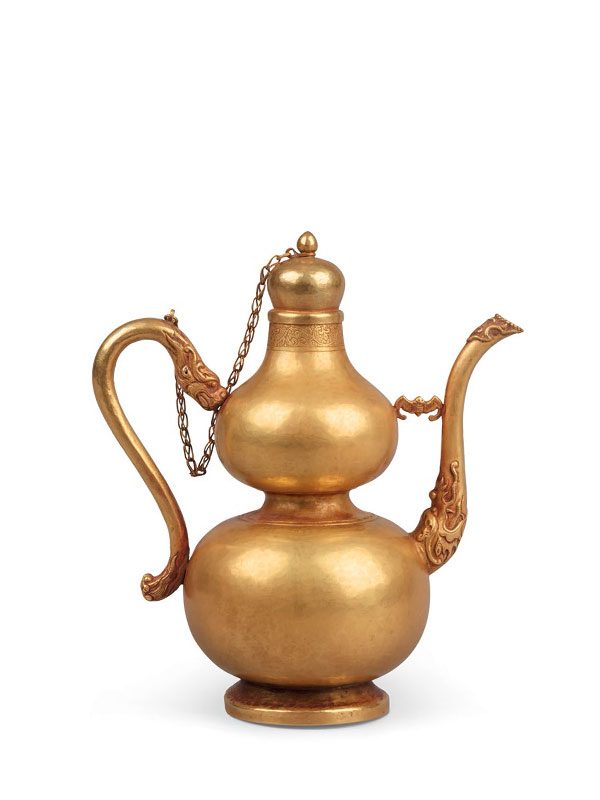 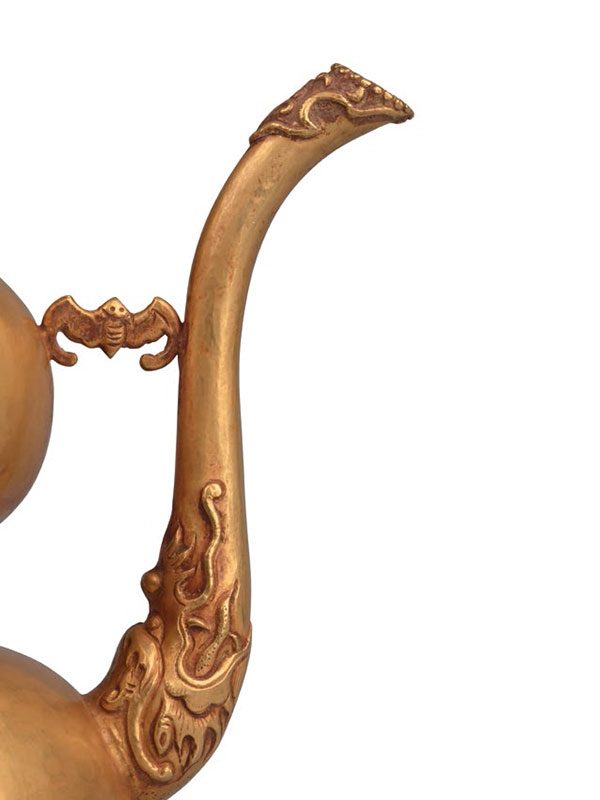 A gold wine ewer of double gourd form, supported on a stepped, splayed foot. The body has an S-shaped handle and a curved spout. The handle takes the form of a stylised dragon, with its head attached to the upper part of the body of the ewer. The elongated spout has its root adorned with a dragon’s head in relief. Its gracefully everted opening is beaded and decorated with a shield-shaped pattern with flowers. The spout is connected to the upper body of the ewer by a bat with outspread wings. The dragons are exquisitely depicted with bulging eyes, arched horns, strong jaws and stylised manes. The short neck is decorated in repoussé with minutely detailed patterns of formal scrolling foliage and stylised flowers. The top is surmounted by a domed cover, which has a finial in the shape of a lotus bud. The finial is connected to the upper part of the handle with an interlocking chain.

This splendid and very rare wine ewer is made of gold of more than 24 carat and might have been used in the imperial court or high aristocratic families. With its brilliant lustre and incorruptible nature, gold has been treasured by most cultures throughout history. In the Chinese tradition gold was appreciated and recognised as a luxurious and costly material. Probably one of the earliest known gold ewers in Chinese history is a Tang dynasty (618 -906) wine ewer found in Xianyang in Shaanxi province in 1969.1   It was designed to hold precious wine made from grapes, a foreign beverage then newly introduced into China. Subsequently, wine ewers made of gold can be found throughout the dynasties, especially in the Ming and Qing dynasties. A gourd-shaped vessel or motif generally represents the power of healing or protection and is associated with longevity. [2] Some gourd-shaped porcelain vases of comparable shape and size are in the collection of the National Palace Museum, Taipei, [3] whilst gourd-shaped lacquer ewers dated to the Ming dynasty are found in the collection of the Palace Museum, Beijing [4] and the Muwen Tang collection. [5] Four closely comparable gold wine ewers from the Imperial collection, larger in size and all dated to the Qing dynasty, are in the collection of the Palace Museum, Beijing (fig. 1). [6]