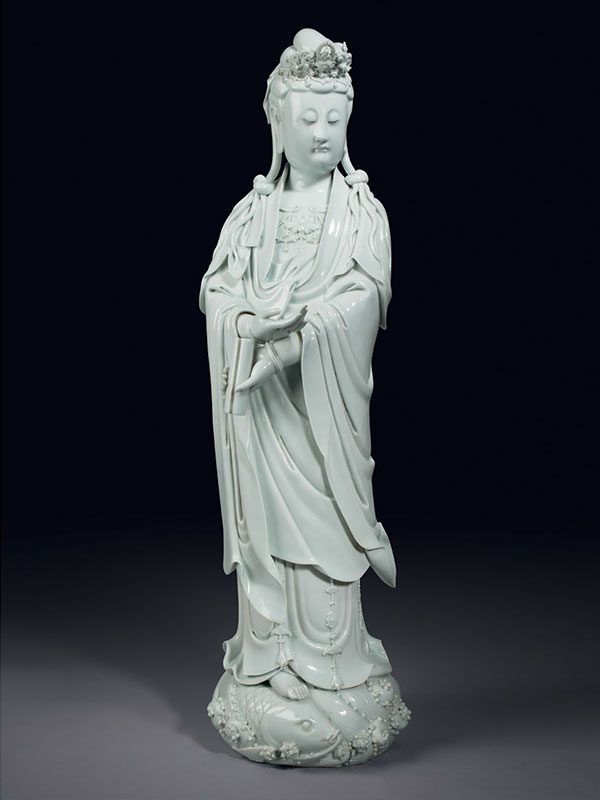 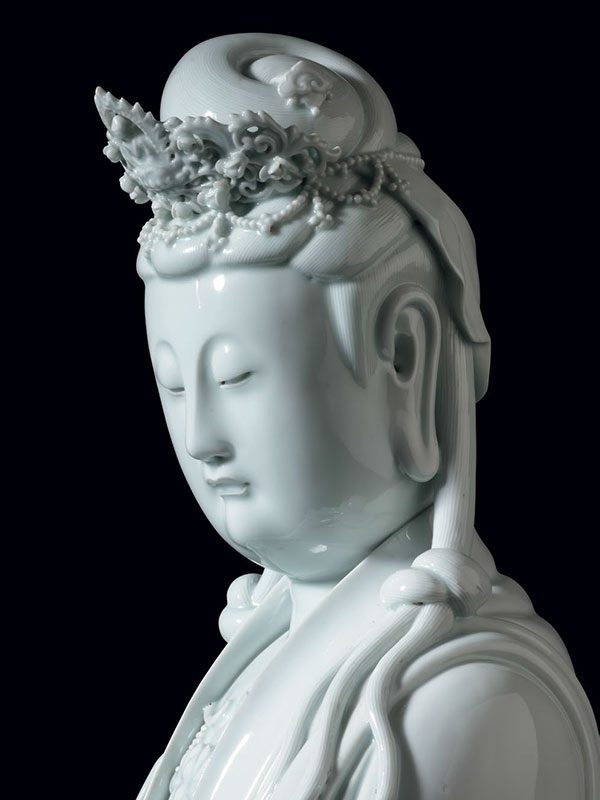 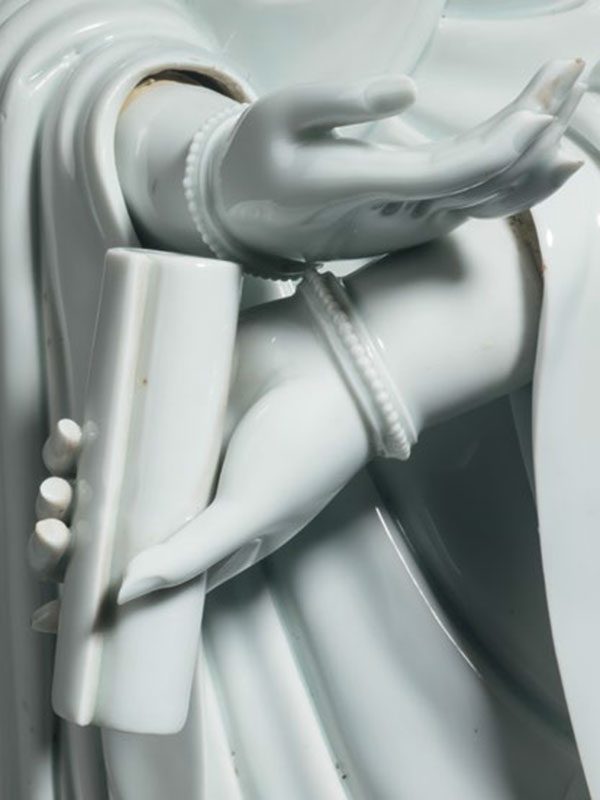 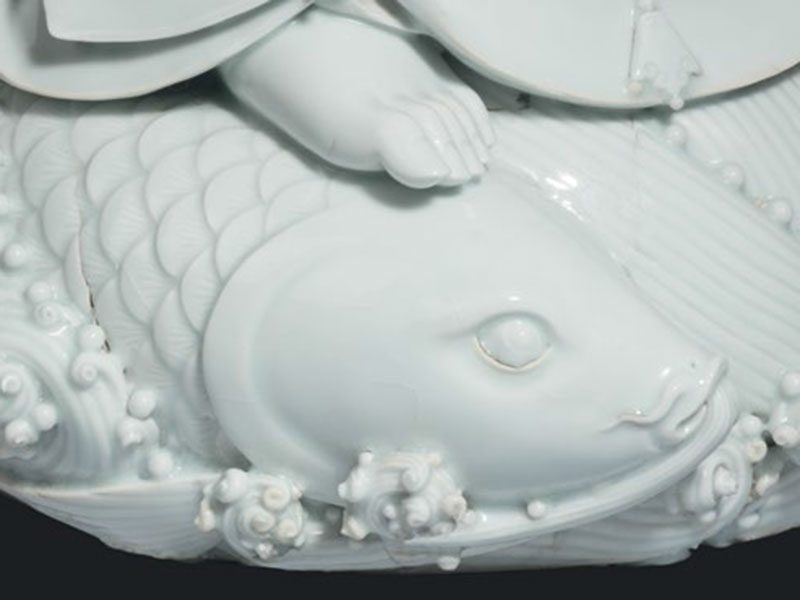 A monumental blanc-de-Chine porcelain figure of Guanyin, standing on a plinth composed of a large carp amongst swirling waves. Her body is slightly turned towards her left and is dressed in loosely fitting robes that fall open at the chest, revealing an elaborate lotus-shaped pendant and leaving only her left foot uncovered. Both her hands are separately made and removable from the wrist. Her left hand holds a scroll, whilst the fingers of her right hand are gracefully extended. The head is slightly turned to the left, and a jewelled crown is placed on her neatly arranged hair in a high chignon. In the middle of the crown is seated a tiny Buddha Amitabha, the Buddha of the Western Paradise. Her neatly coiffed hair falls in two longs strands on her shoulders. Her finely detailed face has a demure, benign expression with downcast eyes, firmly closed lips and elongated ears. The figure is fully covered in a white glaze with a faint bluish hue. A four-character seal mark is impressed on the middle of her upper back, reading Bo Ji Yu Ren (meaning ‘virtue extends to all, even fishermen’).

This monumental and exquisite Guanyin is one of the finest examples of so-called blanc-de-Chine porcelain made at the Dehua kilns in Fujian province. Guanyin is the bodhisattva associated with compassion as venerated by East Asian Buddhists, usually as a female. It is generally accepted among East Asian adherents that Guanyin originated as the Sanskrit Avalokitesvara, which is her male form. As the most popular deity in the Buddhist pantheon, she became one of the favourite figures during the Ming and Qing dynasties. As Guanyin’s popularity rose throughout China with the spread of Buddhism, she became associated in people’s minds with some of the ancient sea goddesses who were common in the coastal regions. Thus a popular portrayal, which can be seen in the present example, features her as the protector of the seas, standing in swirling waters amidst leaping fish and frothing waves, the patron of fishermen and sailors. [1] Depictions of Guanyin in association with sea creatures have been interpreted as Guohai or Duhai Guanyin, literally meaning ‘Guanyin crossing the sea’, popular at least since the Yuan dynasty (1271-1368). [2] However, there are several other readings of Guanyin’s identity based on provincial legends. One is of Princess Miaoshan who provided a model of filial piety. Another more likely identity for this piece is that of the Empress of Tian Hou, also known as Ma Zu. [3] The four-character mark Bo Ji Yu Ren, literally meaning ‘virtue extends to all, even fishermen’ and also known as ‘the Fisherman Mark’, is seen often on blanc-de-Chine and is found primarily on figures of Guanyin and Bodhidharma. The mark was already used during the Ming dynasty (1368 – 1644). Blanc-de-Chine figures of such monumental size and good detail are extremely rare. A few examples of comparable monumental size are known, with some minute differences in detail. Two slightly larger Guanyins are illustrated in Magic Blanc de Chine: one standing on a lotus amongst swirling waves and her left hand similarly holding a scroll is dated to the Wanli period (1572 – 1620) (fig. 1). [4] Another Guanyin similarly standing on a lotus and wave base is dated to the Kangxi period (1661 – 1722). [5] Two further comparable monumental Guanyins are illustrated in Blanc de Chine – The Porcelain of Tehua in Fukien. [6] Some smaller examples are closely comparable in design and similarly hold a holy scroll in the left hand: one with the fingers of her right hand in utpala mudra, dated to the Kangxi period, is in the collection of the Princessehof Museum, Leeuwarden. [7] Two further comparable examples are illustrated in Blanc de Chine – The Porcelain of Tehua in Fukien. [8]