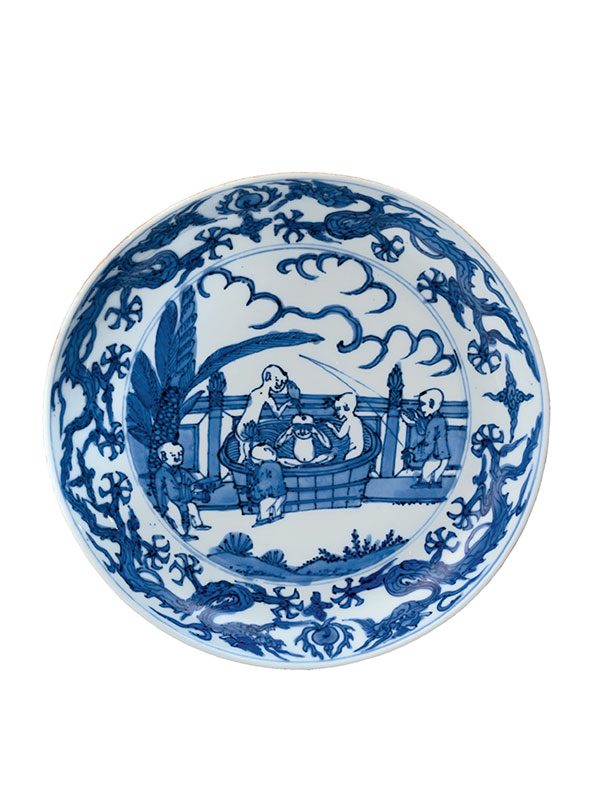 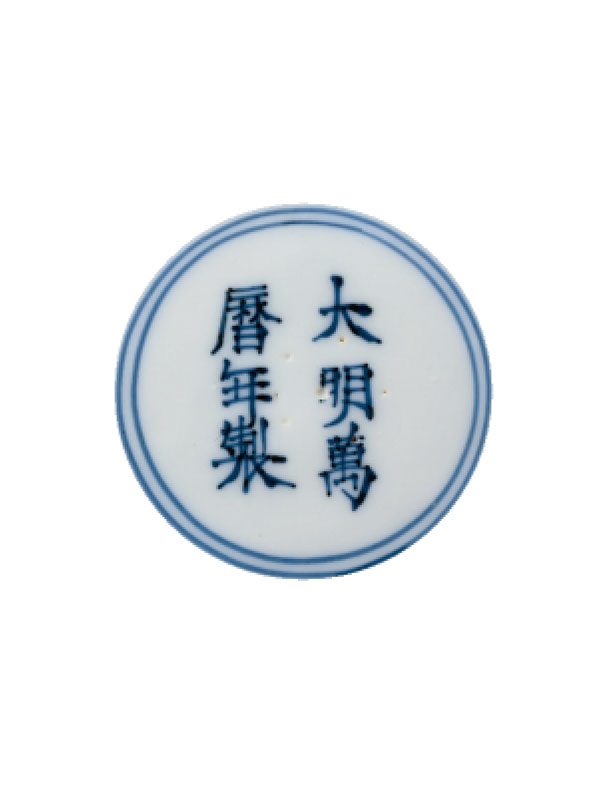 A porcelain dish, supported on a short foot and with a gently flared rim. The interior is painted in underglaze blue with a central scene of three boys playing a game of ‘blind man’s buff’ in a large wooden tub, which is placed on a balustraded terrace with wild clouds in the sky. In the tub, the central boy covers his eyes whilst another boy pours water from a flask over him. Three further boys surround the tub, one fishing with a large rod, which he holds over a balustrade behind the tub. A second boy holds a large lotus flower. The third boy rests against a large plantain tree, holding a bowl. The cavetto is decorated with a frieze of two pairs of five-clawed dragons to either side of a flaming pearl. The reverse is decorated with six clusters of fruit. The base bears a six-character mark of WanIi within a double circle.

Blind man’s buff (also called “blind man’s bluff”) is a variant of tag, in  which the player who is “it” is blindfolded and gropes around attempting to touch the other players without being able to see them, while the other players scatter and try to avoid the person who is “it”, hiding in plain sight and sometimes teasing them to influence them to change direction. The traditional name of the game is “blind man’s buff”, where the word buff is used in its older sense of a small push. The game later also became known as “blind man’s bluff”. Scenes of playful children in various settings were often seen during the Ming dynasty, first appearing on blue and white porcelain during the Jiajing period (1522-1566) and remaining popular throughout the sixteenth century, as can be seen on various Ming porcelain s in the British Museum [1]. The subject was not only a favourite one for the decoration of ceramics, but is also found in earlier periods on other media, such as a 15th century carved lacquer dish in the Metropolitan Museum, New York.[2] A pair of blue and white dishes with the same pattern as the present dish is in the Museum of East Asian Art, Bath, England.[3]