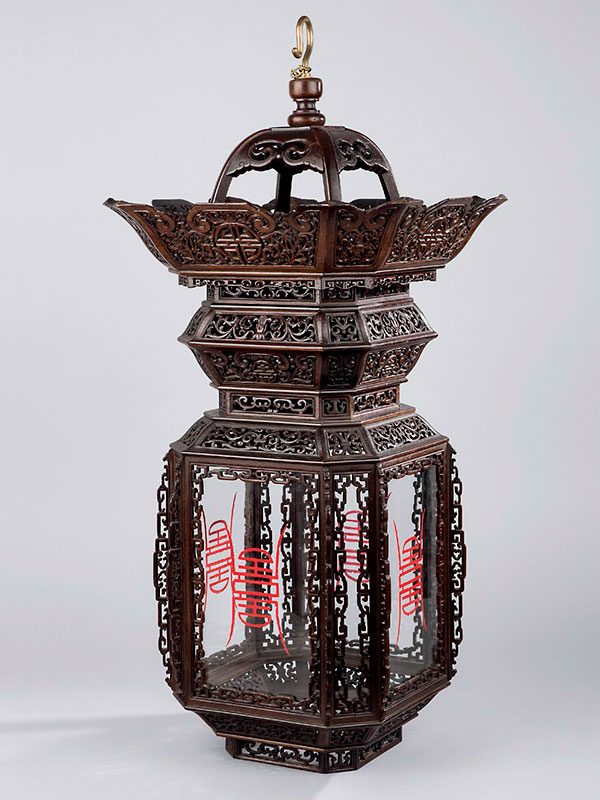 A carved hardwood lantern with a cube-shaped body and a waisted, crown-like top with flared flanges. The cube-shaped body has indented corners and is decorated with vertical notched ridges. Virtually all wooden parts are carved with delicate pierced work, with symmetrically arranged scrolls, ruyi head pattern, and wan characters. A brass hook is attached to the top of the finial, indicating that the lantern was intended to be suspended from high rafters. The transparent glass panels are modern replacements; each is painted with a longevity character in seal script.

Within aristocratic homes during the Ming and Qing dynasties, hardwood lanterns (den in Chinese) such as the present example were suspended from high beams to illuminate dim interiors and to enliven tall dark ceilings with their delicate, backlit lattice designs.  Lanterns are illustrated in the Ming dynasty literature, such as the novel Jin Ping Mei (‘Flower in the Golden Vase’), which provides a sense of their versatility and variety.1 Lanterns represent an ingenious marriage of function and ornament. Some lanterns of this approximate size have separate stands that allow them to be set on a table, such as a zitan carved lampstand dated to the mid to late Qing dynasty in the collection of the Palace Museum, Beijing.2 A pair of zitan hanging lanterns with similar intricate pierced carvings and dated to the late 18th century is in the collection of the Minneapolis Institute of Arts.3 Some hanging lanterns remain in situ in the palaces in the Forbidden City. One of closely comparable shape and design hangs in the east chamber of the Hall of Mental Cultivation, where the Empress Dowager Ci Xi administered state affairs from behind a curtain.4 Other hanging lanterns of various forms are illustrated in Palaces of the Forbidden City. 5