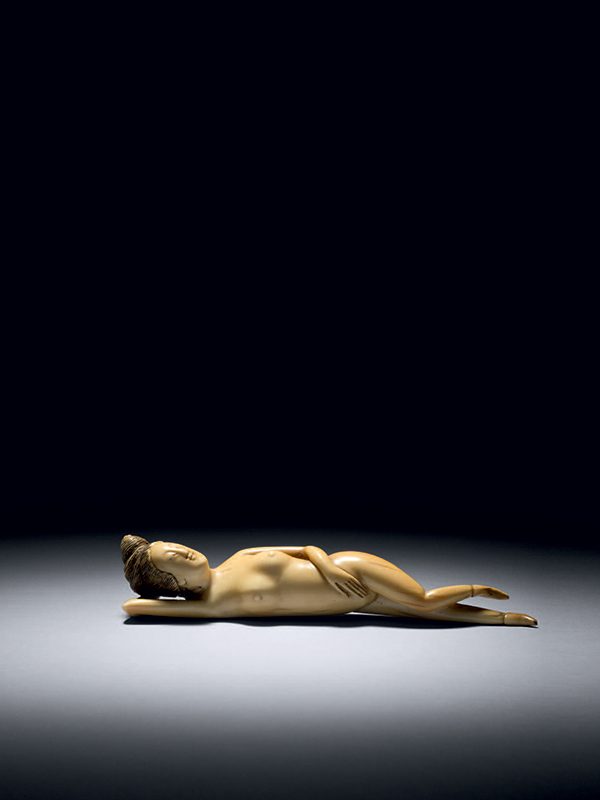 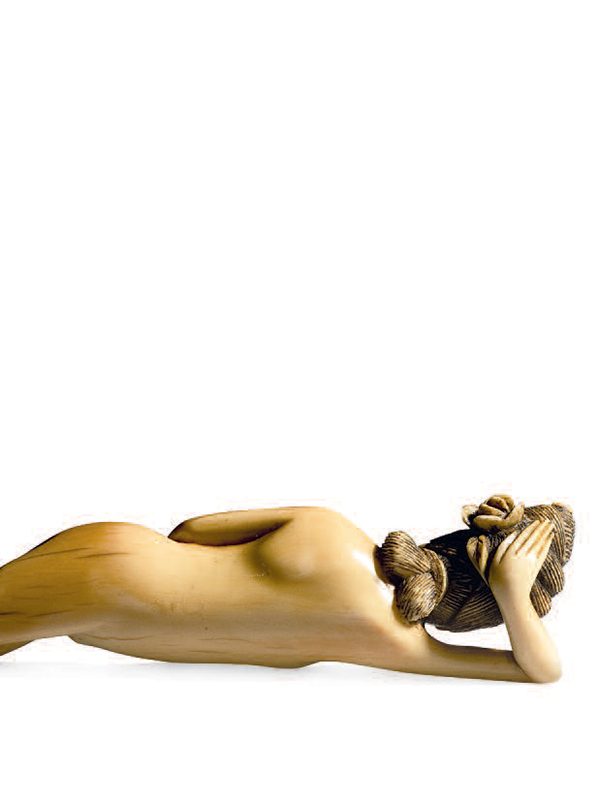 An ivory figure of a nude lady in a recumbent pose, her head resting on her hooked right arm whilst her left hand is gently placed between the legs to cover her modesty. Her neatly coiffed hair is done up in a high chignon and secured by a small pin with a ruyi finial, whilst the lower part of the hair is adorned with a flower blossom. Her well ­proportioned body is completely nude and only her feet are shod in tiny shoes. Her face has a demure expression. Her hands and hair are exquisitely detailed. The ivory is well polished and has acquired a mellow patina with age, retaining traces of the original coloured pigments such as some black colour, which is visible in the hair.

This delicately carved ivory nude lady is one of the most exquisite examples of its kind. Such figures were popularly produced in China from the Ming dynasty (1368 – 1644) until the nineteenth century. Usually described as ‘doctor’s ladies’, they were once thought to be a medical aid, used by a Chinese doctor to locate his female patients’ source of pain, since he could not touch their bodies. However, the precise function of these figures has been widely debated by historians, leading one to the conclusion that they were likely to be crafted as erotic toys.[1] It has been recorded by the Ming scholar Shen De­Fu (1578­ – 1642) that ivory carvers, ‘made small figures of pairs in sexual congress which were of the highest artistic quality’.[2] The present example is especially interesting with a towering hairstyle indicating a high courtly rank, and the uppermost point of the hair knot with a small ruyi symbolizing longevity. An erotic figure of a reclining nude lady in a similar pose but with somewhat rougher carving, dated earlier to the Ming dynasty, is in the Irving Collection.[3] Two other closely comparable reclining nude ladies, similar in pose and dated to the Shunzhi (1643 -­ 1661)
and to the Kangxi (1662 – 1722) periods of the Qing dynasty, are in the Muwen tang collection.[4]