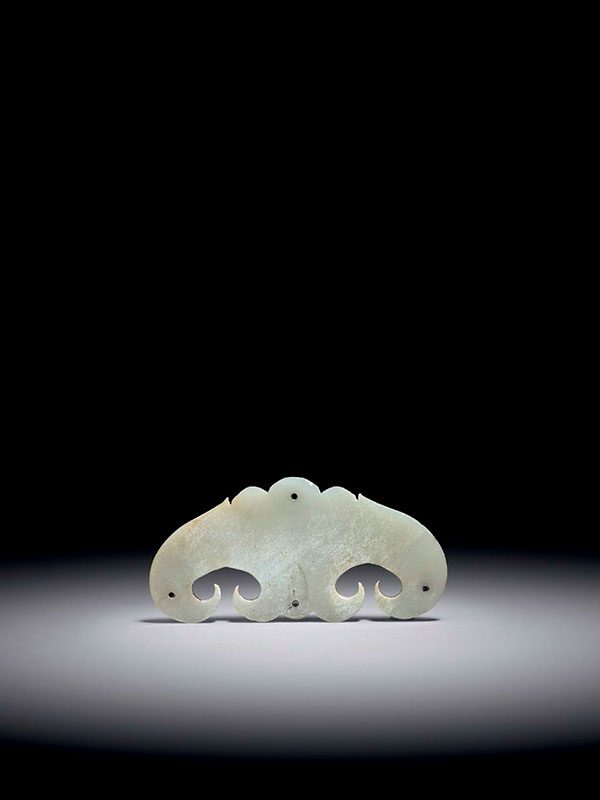 A white jade pei pendant in the form of a symmetrical ruyi. The top and bottom of the pendant are lobed and the arms that extend down to complete the ruyi shape end in scrolling forms with pointed tips. Four tiny holes are drilled into four points on the pendant: one in the centre of the top lobe, one directly underneath this in the centre of the bottom lobe, and one on each arm of the ruyi form.

The jade pei pendant is one of the chief elements of an elaborate jewelled ornament which was worn hanging from a belt, making a pleasant sound when the wearer walked. As Rastelli observes, the sound the ornament made when worn would have been considered favourable, in line with the Confucian etiquette that such ornaments ‘had to emit a faint jingle.’ 1 Whilst various reconstructions of such ornaments have been attempted, their exact arrangement and design remains a matter of speculation. Excavations of elements of such pendants at tombs in Gaoyangyuan, Xian, notably of the high ranking Tang official Liu Zhi and his consort, have helped attribute the ownership of these pieces to people of his rank.2 The holes drilled into the pendant are designed either to have strings of beads made from rock crystal or other precious materials hanging from them, or for the attachment of gold fittings.3  Examples of practically identical Tang dynasty pei pendants are in the collection of The Metropolitan Museum of Art,4 the Mengdiexuan collection5 and in the collection of the Shaanxi Provincial Institute of Archaeology.6