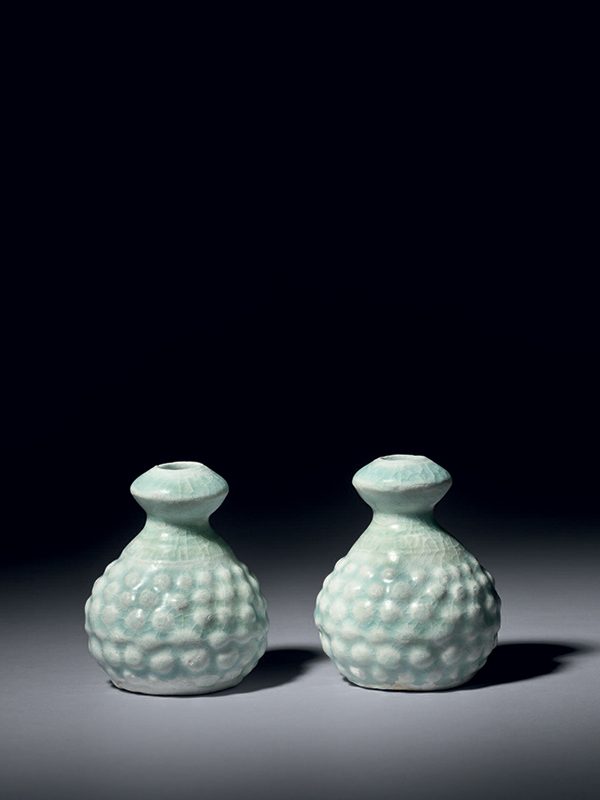 Two miniature porcelain vases of double gourd form. The lower, larger lobe of each vase is moulded with a pattern of evenly spaced, raised dots while the upper, smaller lobe is of disc form. The exterior of the vases is covered in a pale blue glaze that stops just short of the slightly recessed base, revealing the fine white porcelain body underneath.

The double gourd form appears to be quite rare in qingbai porcelain, even though it was a popular shape for vessels throughout the ages. The pleasing shape of the gourd, which is an important auspicious symbol, lends itself perfectly to the decorative arts of China. By virtue  of its numerous seeds, the bottle gourd is believed to bring hundreds of sons (hulu baizi) and is considered a natural symbol of fertility in China.[1]  A very similar miniature qingbai vase of closely comparable overall form was excavated from the Hutian kiln site in Jingdezhen in 1988 to 1999 and is now in the collection of the Jingdezhen Museum of Civilian Kiln.[2]   Another comparable qingbai vase of double gourd form, incised with crossed lines all over its body, was excavated from the same kiln.[3]  A miniature qingbai ewer of double gourd form with moulded decoration was excavated from a tomb dated to 1165 in Dexing city, Jiiangxi province.[4]