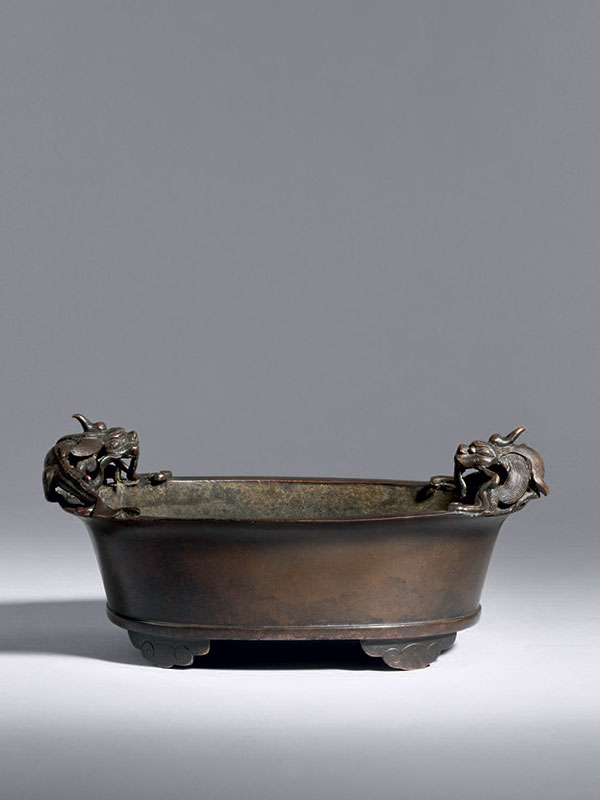 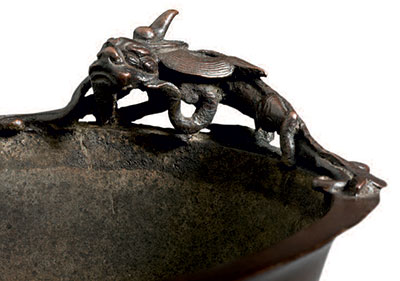 A bronze censer cast in the form of an oval-shaped basin with a flat base, supported on four curved bracket feet. The sides gradually curve outwards towards the flat mouth rim. Two sturdy loop-handles each in the form of a chi-dragon are applied to the sides. The chi-dragons crawl along the edges of the basin with their elongated body gracefully arched. Their eyes, pricked ears and single horn are cast in detail, whilst their bushy manes and bifurcated tails dynamically spread out in either direction. The four shaped feet are decorated with stylised cloud scrolls in the form of ruyi-sceptre heads. The recessed base is engraved with a vertically written, six-character reign mark of the emperor Xuande.

The large quantity of bronze wares associated with literati is an indication of the symbolic importance of this material. From the Song dynasty onwards, when reverence for the past began to manifest itself across a wide range of arts, bronze inevitably became a favourite material for the scholar class. A bronze censer of very similar shape and dynamic design with dragon handles, but slightly smaller in size, is in the collection of Steven Hung and Lindy Chern.[1]