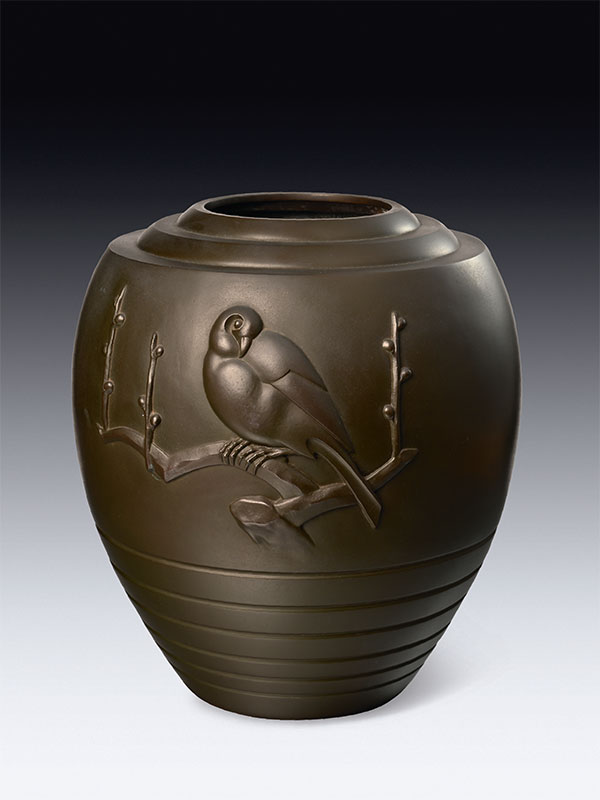 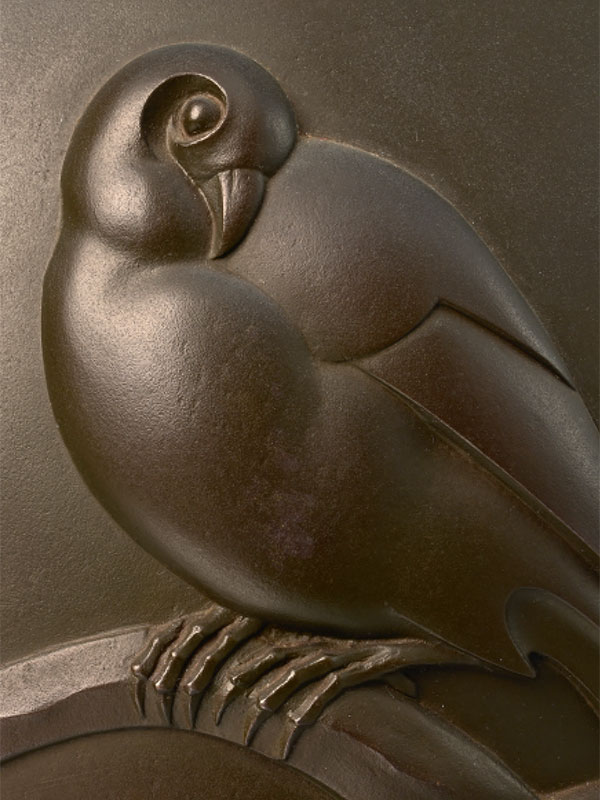 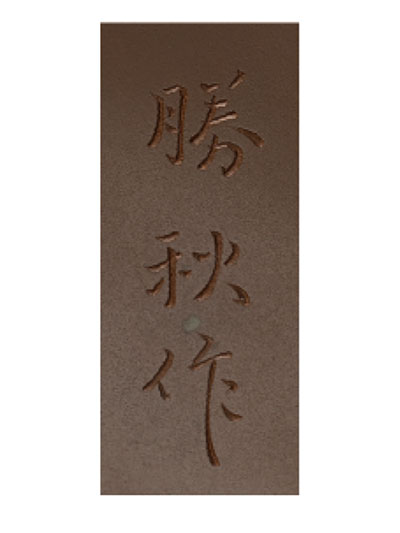 A bronze vase of baluster form, tapering towards the recessed base and with a stepped mouth. One side is decorated in both repoussé and applied techniques with a pigeon sitting on a branch of budding chestnut. Six raised, plain bands encircle the lower section of the vase. The reverse is engraved with the cipher (kaou) of Toyoda Katsuaki. The bronze is covered in a pleasant, chocolate brown patina. The base is signed with a three-character mark: Katsuaki saku (made by Katsuaki).

The maker of this fine Art Deco vase, Toyoda Katsuaki (1897-1972), was born in Kurume City, Fukuoka prefecture. He was first interested in oil painting, but later went on to study metal casting at the Tokyo University of Fine Art, where he was taught by the famous metal artist Tsuda Shinobu. Toyoda Katsuaki is particularly known for incorporating Art Deco influences in his forceful style of metal work. In 1926 he founded with like-minded emerging artists a group called Mukei (Formless). In 1927 he first exhibited at the 8th Teiten exhibition and thereafter he exhibited widely at the Teiten, Bunten, and Nitten exhibitions. In 1935, together with Takamura Toyochika, he was one of the founding members of the important group Jitsuzai Kogei Bijutsukai (Actual Applied Arts Association), whose ethos was ‘Function equals Beauty’. In 1942 he returned to his hometown of Kurume City and set up the artistic community Akasaka Toen Studio. A beautiful plain, ribbed bronze vase by this artist, cast in 1937, is in the collection of the National Museum of Modern Art in Tokyo and was included as no. 37 in the 1996 exhibition Craft Movements in Japan 1920s-1945 held in various places in Japan.[1] A square bronze flower vase, cast in 1933, is in the same collection.[2] Two further bronze vases by Toyoda, one cast in 1937, the other in 1939, are in the collection of the Nigata Prefectural Museum of Modern Art.[3]