A pair of ivory rosewater sprinklers 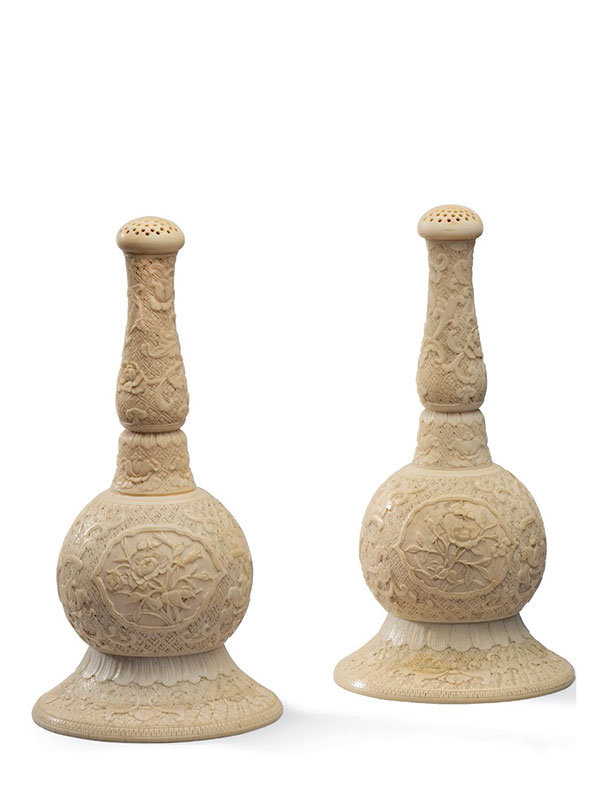 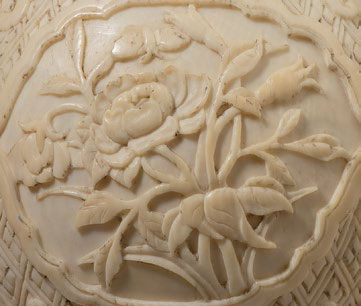 A pair of ivory rosewater sprinklers, each with an elongated, baluster-shaped neck and a bulbous body, supported on a splayed foot. The rounded body is carved in relief with three shaped cartouches containing rose flower branches, all on a geometric ground interspersed with lotus flowers in tendrils. The foot rim and the neck are similarly carved with lotus flowers, leaves and geometric patterns. The mouth is capped with a pierced, domed cover.

These two highly unusual rosewater sprinklers are to our knowledge the only known examples made of ivory.  Most sprinklers are made of silver, filigree or painted enamel and intended for sprinkling rosewater or perfume.  These two ivory sprinklers consist of several parts that can be unscrewed, in the same manner as metal examples. In the 18th and 19th century, silver rosewater sprinklers were made in Guangdong (Canton) for export to Europe and the Islamic World, namely Arabia, Southeast Asia, the Indian sub-continent, and also southern Russia and Armenia.1  As the main ivory workshops were also clustered in Guangdong during the same period, it is very likely that the current sprinklers were inspired by silver examples. Two pairs of silver and filigree rosewater sprinklers, of closely comparable shape and proportions, were made between 1740 – 50 and acquired by Catherine the Great in 1789 from the Winter Palace main collection; they are now in the collection of the State Hermitage Museum in St Petersburg.2 Another 18th-century silver-gilt and filigree example and two 19th-century silver repoussé bottles are in the Chan collection in Singapore.3 A comparable ivory vase with cover, similar in the decoration and low-relief carvings on the surface, dated to the 19th – 20th century, is in the Sir Victor Sassoon collection. 4