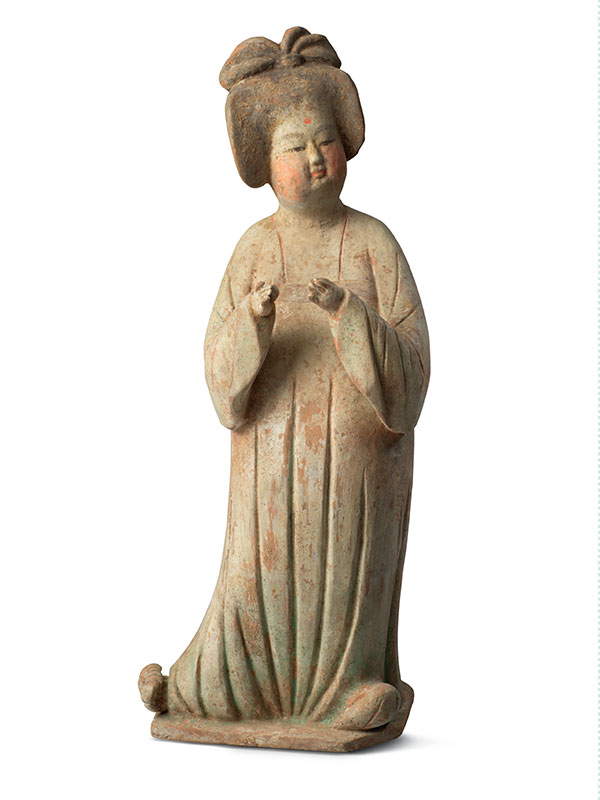 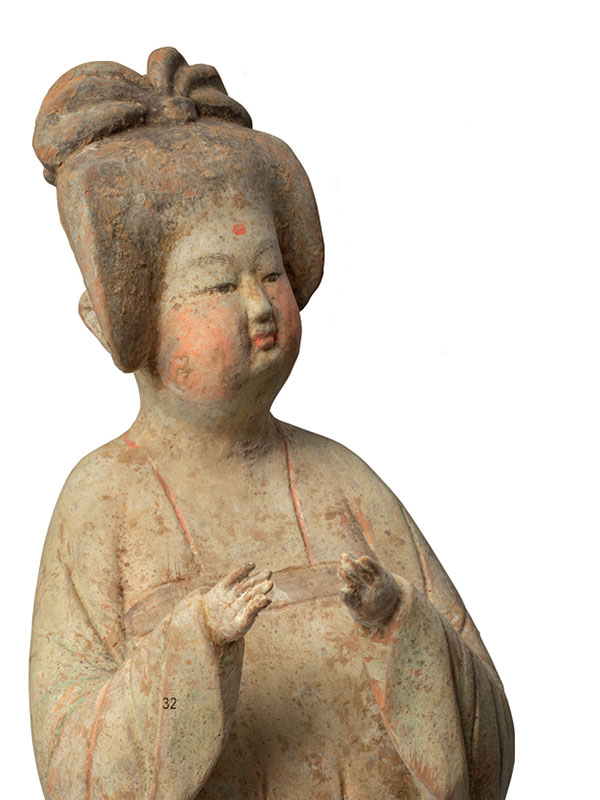 A pottery figure of a court lady, standing on a flat, seven-sided base, dressed in a long-sleeved floor­ length robe, which covers her left foot. Her body is elegantly curved, and both arms are bent at the elbows and held before her. Her head is slightly tilted and she points forward with the index finger of her right hand. The curled tip of her right shoe protrudes from underneath her robe, which falls in folds around her legs. Her neatly coiffed hair is smoothly gathered away from her face and drawn up into an elaborate topknot. The delicate facial features of a small mouth and nose, and narrow eyes are precisely rendered. The centre of her forehead is adorned with a bright red circular spot. The buff­ coloured pottery is covered in a thin layer of white slip and retains traces of the original black, red, and russet coloured pigments to the face and bright green pigments on the robe, specifically in the folds.

This exceptional pottery figure is a very fine example of Tang dynasty tomb sculpture. The plump court lady probably represents a person of exalted rank. which is indicated by her full-bodied figure and by the elaborate arrangement of her hair, both of which are considered to be common features of high-ranking ladies. This carefully potted figure embodies what Tang dynasty society considered to represent the ideal of feminine beauty: a full figure and a plump face.[1] A comparable figure with different hairstyle is in the Meiyintang Collection.[2] Another similar figure is in the collection of David W. Dewey.[3] The shoe with the elaborate cloud­ shaped toecap worn by the present figure on her right foot is very similar to a pair of “three-cloud” shoes in soft brocade dating from the Tang period, unearthed in Astana, near Turfan in the Xinjiang Uygur autonomous region, and in remarkable state of preservation.[4]