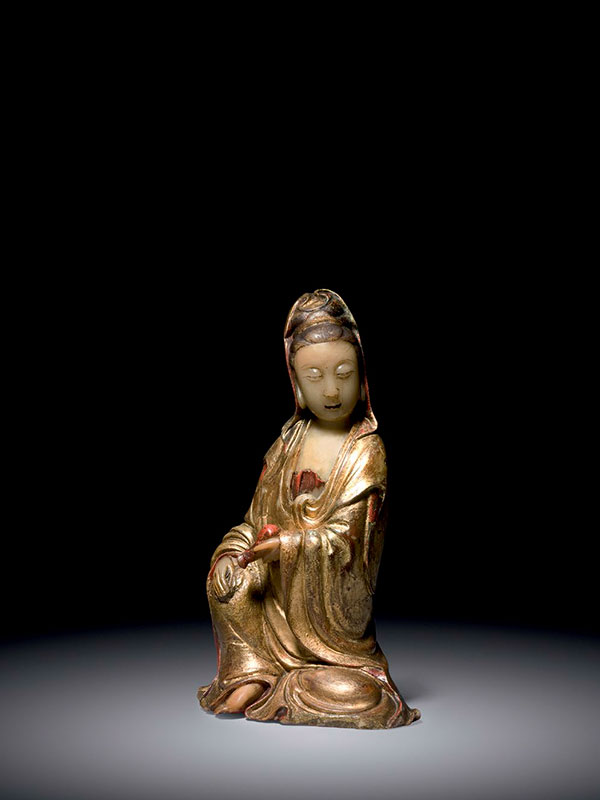 A soapstone figure of Guanyin, seated in the so-called ‘royal ease’ position. Her body is dressed in loosely fitting robes that fall open at the chest and leave both her hands uncovered. The right hand rests on her drawn-up leg with exposed foot, whilst the left hand holds a water vase. The head is downcast slightly; her neatly arranged hair is held in place by a tiara and is covered by a cowl. The robe is delicately incised with detailed cloud, wave and flower patterns. The soapstone is of translucent creamy-ochre colour, which can be observed on her face, the revealed chest, both hands and the right foot. The robe retains large amounts of original gilding and red pigments, whilst her hair is painted in black. The base is covered in a layer of red paint.

Soapstone, known in Chinese as hua shi meaning literally ‘slippery stone’, is among the softest of all stones at only one on the Mohs’ scale of hardness, a quality which makes it particularly suitable to small scale sculpture.1 This soapstone figure of Guanyin unusually retains considerable traces of the thick coat of gold paint which would have transformed the appearance of the image into something akin to gilt bronze, hiding the soapstone texture altogether. A similar treatment can be found on ivory pieces, such as a standing Guanyin with a child (Song Zi Guanyin) dated to 1580 – 1640 AD in the collection of the Victoria and Albert Museum,2 and a standing female deity dated to the Ming dynasty in the collection of the Palace Museum, Beijing.3   A soapstone Guanyin seated on a rock, with closely comparable facial expression and gesture, dated to the 16th – 17th century, is in the collection of A. Vecht, Amsterdam.4