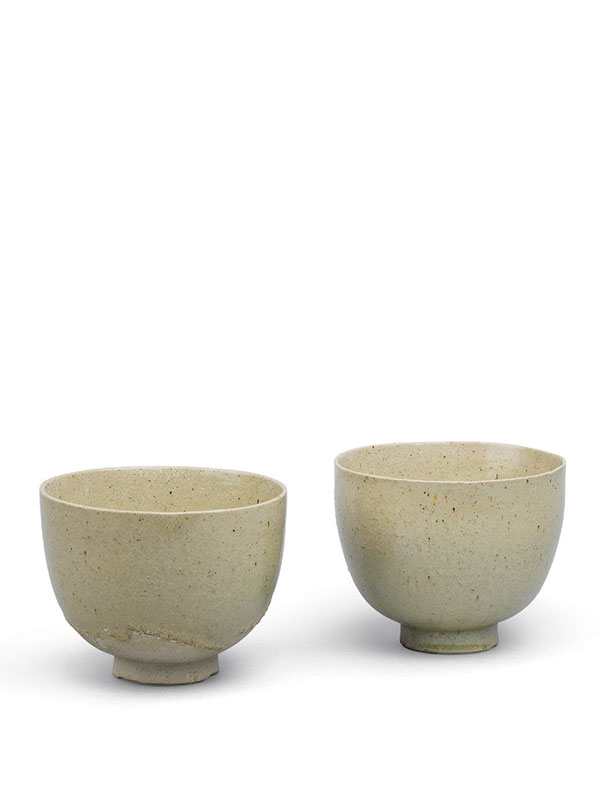 Two stoneware cups, each with a rounded, U-shaped body that tapers out gently towards the rim and is supported on a short, tapered foot. The thinly potted cup is entirely unadorned and covered in a finely crackled, transparent yellowish-green glaze that has iron-oxide marks. Three spur-marks are visible on the inside of each bowl as well as on the foot, indicating that they were stacked for firing. On one cup, the glaze stops well short of the base in a wavy line, whilst on the other it extends over the foot unto the base. Where the material is unglazed, it exposes the finely grained stoneware body.

These elegant cups of minimalist form were intended as drinking vessels, most likely for wine. Wine-cups of various sizes were included among grave goods in the North during the 3rd century. During the 6th and 7th century, porcellanous examples with a flat base, straight sides and three spur marks were produced at Lincheng and Neiqiu counties, both sources of the Xing type wares in Hebei province, Anyang in Henan province.1  Some earlier comparable examples, similar in size and with a yellowish-green glaze but with a slightly higher foot, have been found in tombs dated to the Northern Qi period (550 – 577).2 Two Sui stoneware cups comparable in colour and shape, one of slightly larger size and the other smaller, are in the collection of the Asian Art Museum in San Francisco.3  Two further examples are in the Carl Kempe collection, Sweden.4 Three slightly smaller cups of similar proportions excavated in 1989 and dated to 595  in the Sui dynasty, are in the collection of the Fenyang Museum in Shanxi province.5