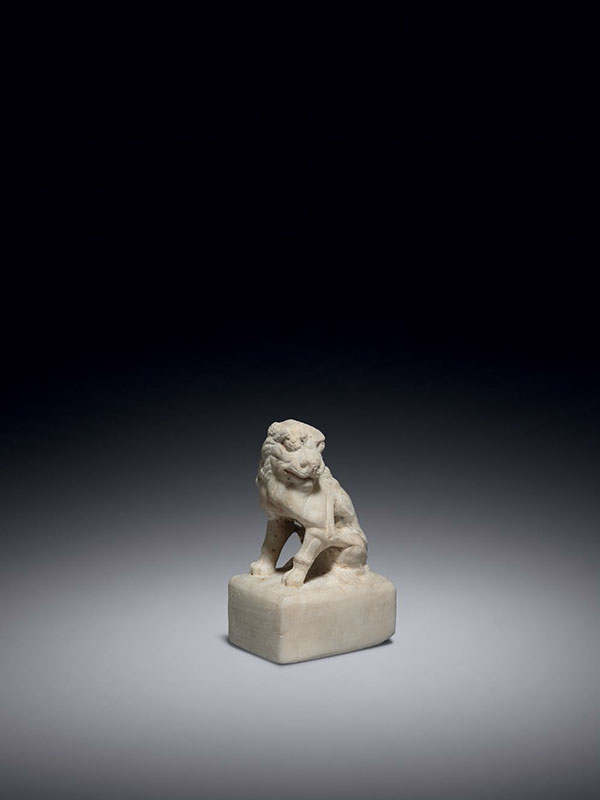 A small marble sculpture of a lion. The animal sits on a square plinth with its front paws forward, head turned sharply to its left and its tail underneath its body, curled around its left hind leg. Its mouth is slightly open and has a snarling expression. The elaborate mane covers the top half of its body. The details of the mane and the musculature are minutely defined. The stone is of a creamy-white tone.

In the arts of the Tang dynasty the lion is a popular subject, and the animal is frequently portrayed in a variety of media, such as ceramics, bronze or stone. The animal was not indigenous to China and first came to the attention of Chinese artists when it was introduced from India, Iran and the Near East, where it was associated with royalty. It is recorded that a lion was sent from Samarkand as a tribute gift to the Chinese Emperor Taizong in the year 635, and that a poet was ordered to compose a rhapsody in its honour. [1] This very fine piece, despite this unusually diminutive size, retains all the sculptural qualities and proportions one would expect from a large-sized sculpture. Two closely comparable white marble lions of similar design are respectively in the collections of the Metropolitan Museum of Art (fig. 1) [2] and the British Museum. [3] A further comparable large marble lion, probably used to guard a temple entrance, is in the collection of the Cleveland Museum of Art. [4]