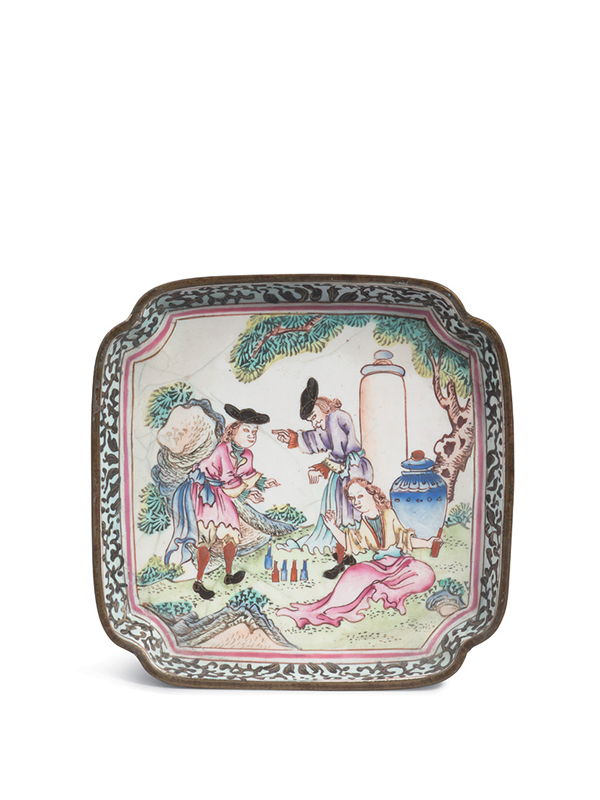 A small square dish with indented corners, supported on four short feet. The flat surface is decorated in coloured enamels with three foreign figures in a landscape setting. The seated figure holds a bottle in his left hand, while five other bottles stand on the ground on his right. The two other figures, one standing behind and one approaching from the left, join in for drinking. A column and a covered vase are at the back. The grass ground and the pine trees are painted in layers of green, with rugged rocks around. The scene is contained within a double-circled cartouche in red. The sides of the interior and exterior are adorned with dark scrolling tendrils against a bluish-white ground. The white base has a stylised flower painted in the middle; probably the mark of a workshop.

This painted enamel dish is a perfect combination of the exchange of craftsmanship between the East and the West. Painted enamels were known in China as ‘foreign porcelain (yang ci)’, and known in English as ‘Canton enamel’ after the main centre of their production in South China. The art of enameling on metal was not a native Chinese art form, but introduced during the reign of Emperor Kangxi (1661 – 1722) by the missionaries of the Jesuit order.[1] French missionaries of the late 17th century had brought with them specimens of the famous Limoges enamels and the first date of manufacture at Canton can be traced to 1683.[2] In the course of the 18th century, as production grew, the repertory of forms and subjects widened and a fuller palette of colours was developed.[3] These copper wares were produced in Beijing for imperial consumption, and were also a popular export product, mainly produced in Canton in the 18th and 19th centuries. Three closely comparable small square dishes of the Qianlong period (1736 – 1795), comparable in the decoration of foreign figures in a Chinese setting and with the same tendril pattern on the sides, were exhibited at the China House Gallery at New York in 1970.[4] A number of further examples are in the collection of the Victoria and Albert Museum: two are similarly decorated with foreign figures5 and three other examples have a comparable tendril decoration on the sides.6

Provenance: a circular paper label on the base reads ‘Spink & Son Ltd. Est. 1666’