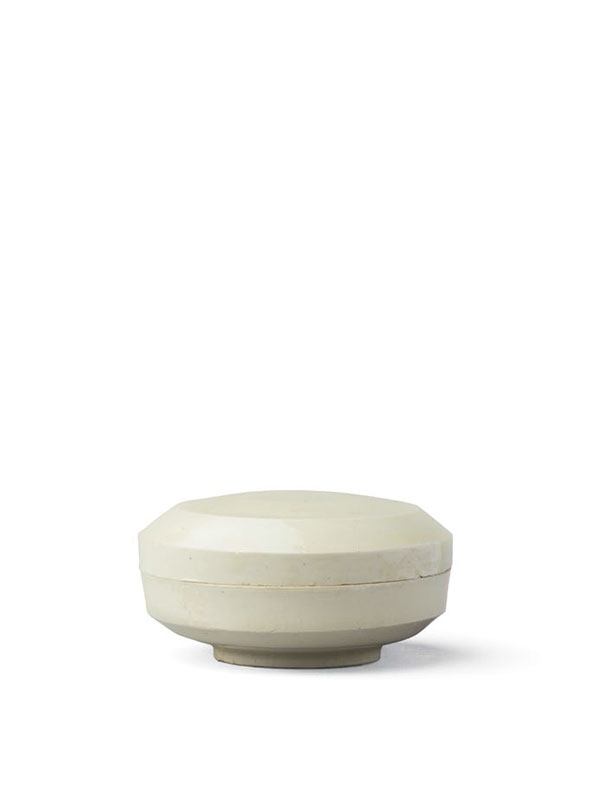 A small stoneware box of circular form with tapered sides, supported on a low foot. The stepped domed cover has a slightly concave top. The box is covered inside and out in an ivory-tinged glaze, which leaves only the base and rims uncovered, showing the fine-grained ceramic body, which is burnt slightly orange in the firing.

The pure, simple form of this box was inspired by metalwork of the period, and it was most probably made to serve as a container for cosmetics. Small ceramic boxes of this angular form are known to have been made from the Tang dynasty (618 – 906 AD) onwards in both the xing and the ding kilns, situated in Hebei province, and are sometimes difficult to distinguish from one another. [1] The difficulty to identify their kilns and dating can be seen from the following examples with closely comparable size and shape to the current box. Two similar white-glazed ding ware porcelain boxes, dated to the Tang dynasty, are in the collection of the Palace Museum, Beijing. [2] Another dated to the Tang to Five Dynasties period (10th century) and catalogued as either xing or ding ware is in the collection of the National Palace Museum, Taipei. [3] A nearly identical white-glazed porcelain box without attribution to a kiln was excavated in 1989 from a late Tang dynasty tomb in Heibei province and is now in the Shijazhuang Museum. [4] Two xing-type boxes are respectively in the Shanghai Museum, dated to the Tang dynasty [5] and in the collection of Brian McElney, dated to the Five Dynasties to the early Northern Song dynasty. [6]