Bamboo brushpot with figures in landscape 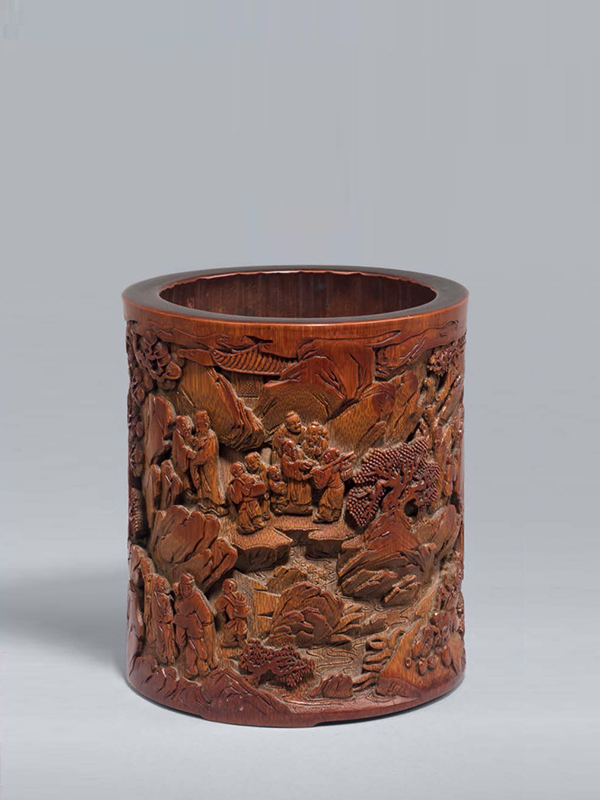 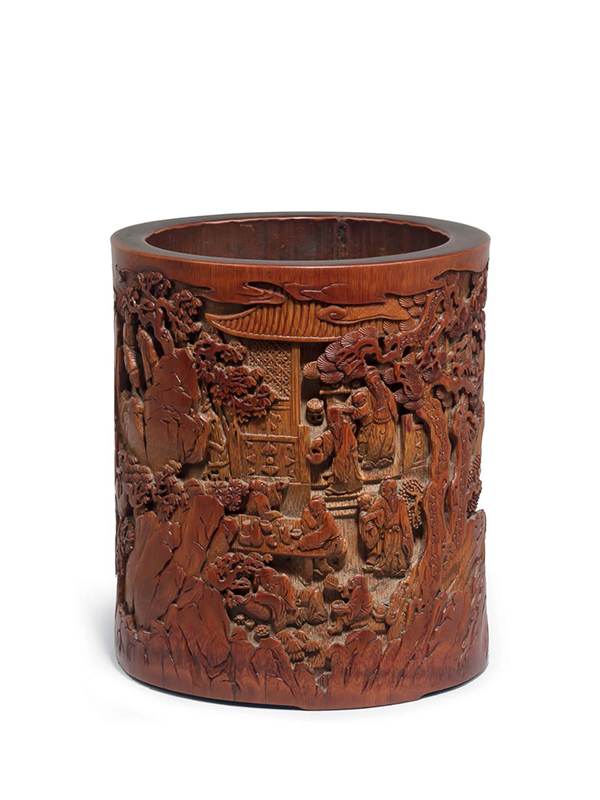 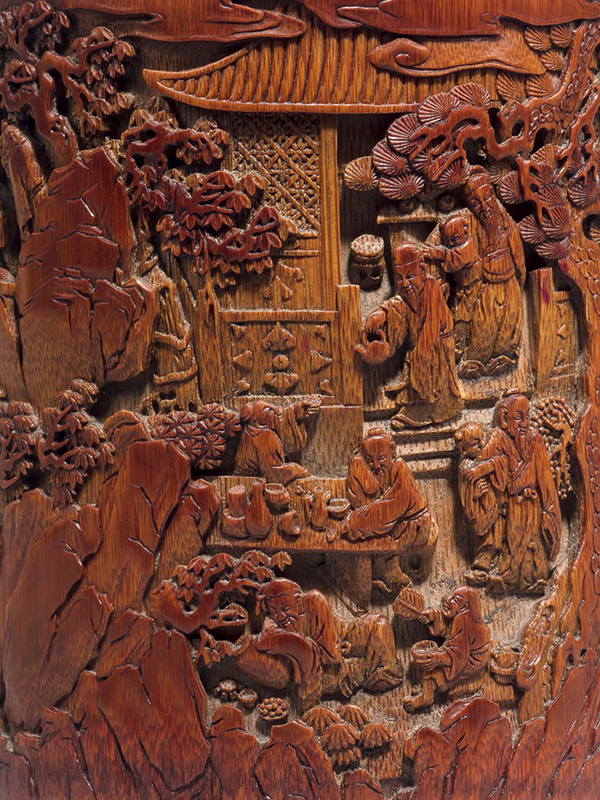 A large bamboo brushpot of cylindrical, slightly waisted shape, supported on three shallow feet. The exterior is carved in high relief combined with shallow carving, depicting in great detail a scene of scholars in a landscape setting with rocks and trees. The scene is partly set before a roofed pavilion, where it features an elaborately robed scholar sitting at a table laden with an assortment of pots and cups. A sage is holding a teapot on the steps of the pavilion, offering tea to another literati sitting beside the table, seemingly helping him to sober up. The scene is occupied by drunken literati: two are carried respectively by an attendant, with one coming out of the pavilion and the other in the yard; one is totally drunk and resting on a wine jar in the foreground; a further one is leaving the feast and is pushed forward by his attendants. On the opposite side of the brushpot various groups of figures are depicted that have just left the feast through the meandering pavement aside the mountains and are having conversations. One attendant has his arms opened, seemingly waiting to receive the drunken literati from the other side of the mountain. The upper section depicts several literati surrounded by their attendants, some sober but some still requesting more wine from the other one who carries a basket over his shoulder. The lower right section underneath the pavement depicts a servant resting on a large wine jar, whilst near him are two literati, recumbent on a rocky ledge, surrounded by partly spilt crockery. A third scene has a literati, obviously the worse for wear, carried by two servants in the foreground. The two sides are separated by large groups of pine trees and rocky mountains. The brushpot has its original bamboo joint as its base, whilst the interior is smoothly polished with well-aged patina.

This exquisite bamboo brushpot is in superb condition and represents the peak of bamboo carving technique of the early Qing period. The art of bamboo carving emerged and established itself in Wuzhong (Suzhou in Jiangsu province) and its vicinities during the mid-Ming dynasty. Jinling (Nanjing) and Jiading, both in Jiangsu province, became the two key regions of bamboo carving activity. Around the late-Ming and early Qing dynasty, Jiading bamboo carvers started to combine high and low reliefs to give variety and contrast. The levels of different depths in protrusion increased from initially only a simple one or two to ‘deep and shallow altogether five or six different grades’ by the time of Kangxi’s early reign.[1] The subject depicted on this brushpot, a group of scholars having a leisurely time in the mountains, possibly represents the famous reunion known as ‘the nine worthies of the Tang (Xian shan jiu lao)’—a group of nine poets over the age of seventy who met at the Fragrant 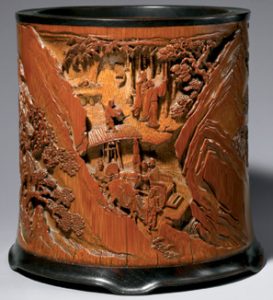 Mountain Temple near Longmen, outside the city of Luoyang, in the Tang dynasty during the late 9th century. These nine poets were known to be disaffected from the politics of the day and sought solace in poetry, wine and conversation. The most famous among these nine poets is Bai Juyi (772 – 846), who spent his last years at the temple. He was known also by his literary name, ‘Hermit of Fragrant Mountain’. The subject is commemorated in numerous paintings throughout the time. Two closely comparable bamboo brushpots with a decoration of figures in landscape, both dated to the Kangxi period and similar in the carving techniques, are in the collection of the Metropolitan Museum of Art. One of them is carved by a famous Jiading bamboo carving artist Gu Jue (act. late 17th century), whose works are known for their highly complex compositions and meticulously executed details (fig. 1).[2]

Another brushpot carved with a garden scene in high relief, similarly with its original bamboo joint and dated earlier to the late Ming to early Qing dynasty of the 17th century, is also in the collection of the Metropolitan Museum of Art.[3] Some further comparable bamboo or wood brushpots, similarly carved with literati in landscape setting in high relief, are in the collection of the Palace Museum, Beijing.[4]