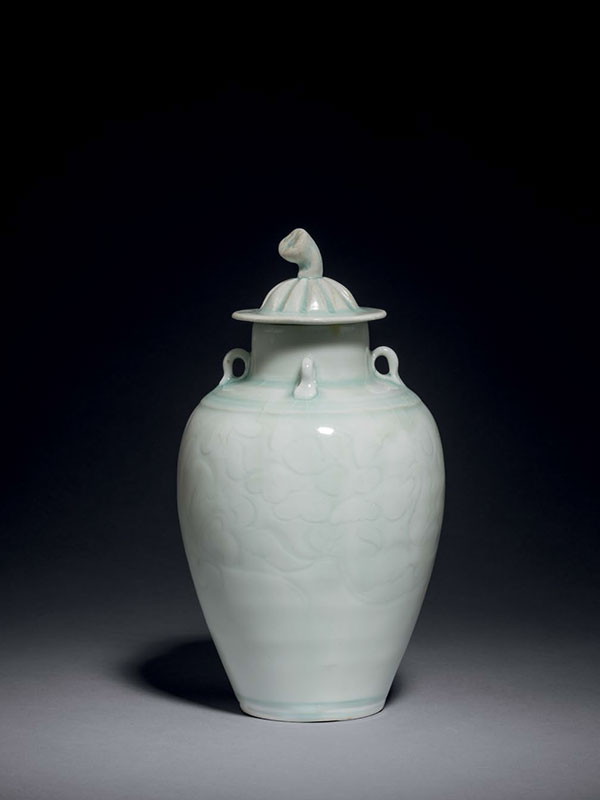 A porcelain vase of baluster shape, the sides rising upwards from a slightly recessed base, curving towards the stepped shoulder and surmounted by a straight neck, around which four small lug handles have been applied. The upper part of the body is decorated with a freely carved design of scrolling flowers, which have combed details to the petals. The cover is of domed shape with a broad, flat rim. The domed part of the cover is moulded with ribs and surmounted by a stalk-shaped finial. The vase is covered in a pale bluish glaze, which pools in the crevasses to an aquamarine tone, forming characteristic ‘tears’ in places. The base is unglazed, exposing the white porcelain body underneath and has characteristic firing marks.

The body of this unusual qingbai vase is very thinly potted, rendering it translucent when a light is shone through it. Qingbai, meaning ‘blue white’, is also commonly known as yingqing (‘shadow blue’), the colour resulting from the reduction of a tiny amount of iron in the glaze with minimum impurities in body and glaze material during the firing. The earliest ceramics identified as qingbai ware were produced in the late 10th century at Jingdezhen (also known as Raozhou) in Jiangxi province. In the Song dynasty, Hutian was the main kiln site at Jingdezhen that produced such wares, which included the best of the pure white-bodied porcelains covered with the transparent, icy blue-tinged glaze. The distinguished Southern Song (1127 – 1279) ceramic historian Jiang Qi praised qingbai ware and recorded its popularity contemporaneously, referring to it as Raoyu, ‘jade of Raozhou’. [1] The rounded baluster form, combined with the domed top and stalk finial appears to be extremely rare. A closely comparable melon-shaped covered vase made in the Hutian kiln, similar in proportion and in design, with four loops but much smaller in size, is in a Chinese private collection. [2] Another Northern Song qingbai vase decorated with a petal pattern around the body, similar in size and proportions, but without a cover, is in the Muwen Tang collection. [3] Two octagonal qingbai vases of comparable size, with four loops and a cover, dated to the Northern Song dynasty are respectively in the Muwen Tang collection [4] and the collection of the Jianxi Provincial History and Ancient Ceramics Committee. [5]