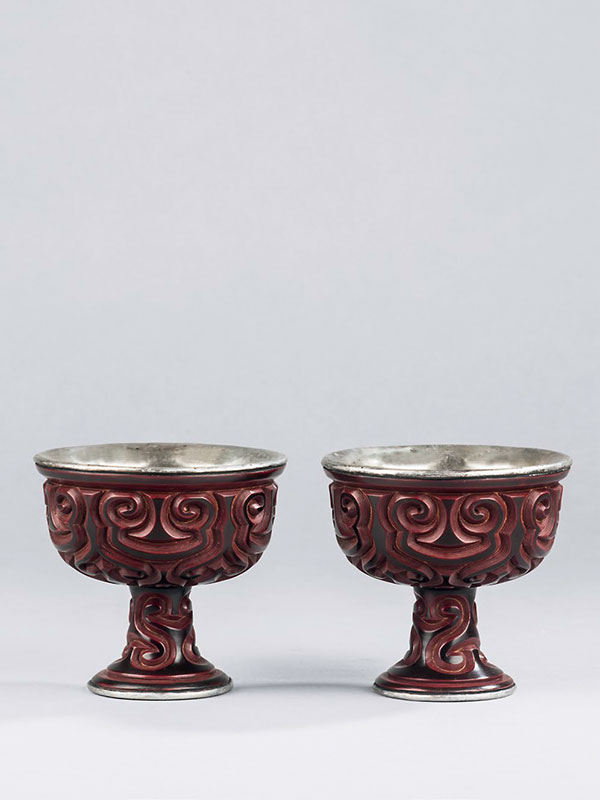 Two identical lacquer stem cups, the trumpet-shaped base supporting a shallow bowl with flared rim. The exterior of the cup is carved in the tixi technique with a single register of five carved pommel scroll motifs. An inverted scroll design is carved around the base of the cup. The exterior of the stem is further carved with four pommel scroll motifs. The distinctive grooves are cut through a thick layer of lacquer at an angle, revealing the alternating coats of red and black. The interior of the bowl and the slightly recessed base are lined in silvered metal.

This pair of lacquer stem cups attracts attention with their skilful application of alternate and distinct layers of black and red lacquer and the sharpness of the carving. They are carved in a technique known as tixi, resembling the texture of rhinoceros horn, hence the name tixi, ‘ti’ (to carve) and ‘xi’ (rhinoceros). [1] This technique refers to the application of multiple layers of two or more contrasting colours of lacquer that are then carved at an angle. The technique originated during the Southern Song dynasty (1127 – 1279) and continued to be popular well into the 16th century. The composite scroll design combined with the very deep carving suggests that these stem cups were made in the Ming dynasty. A pair of tixi lacquer stem cups from the Garner collection, closely comparable in size and design, with an incised inscription ‘yu-shih’ (meaning ‘imperial edict’), dated to the Ming dynasty, to about the 16th century, is now in the collection of the British Museum. [2] A further comparable red lacquer tixi stem cup is in the Chao collection. [3]