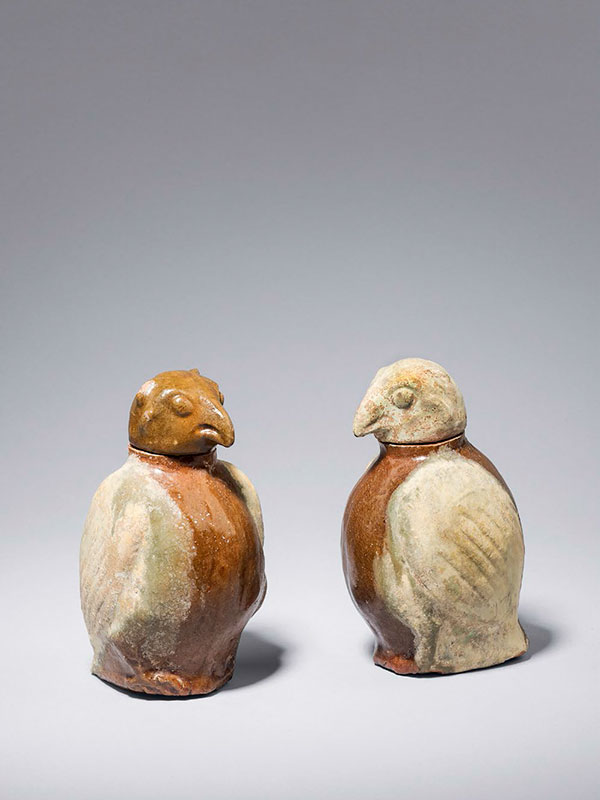 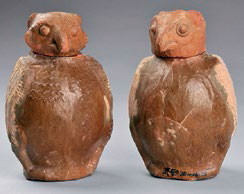 A pair of pottery containers, each in the form of an owl with removable head. The birds aredepicted seated with their wings folded; the details of the claws and feathers are carefully rendered. The heads have pointed, curved beaks, small ears and bulging eyes. The red pottery is covered in brown and green lead glazes, which are applied with precision. The green colour has mostly become silvery iridescent.

Among the many animal motifs seen in early Chinese art the representation of the owl is one of the most prominent yet most mysterious images. The artistic development of pottery containers in the form of an owl can be traced back to the Neolithic time of the Yangshao culture (c. 5,500 – 3,500 BC).[1] Later, many Shang dynasty (c. 1600 – 1050 BC) bronze vessels were clearly inspired by the owl motif, either in the form of the vessel itselfor as surface decoration[2] – such as an owl-shaped zun whose head forms a removable lid in the Yale University Art Gallery collection.[3] It has been proposed by scholars that the mythical black-bird (xuanniao), from which the Shang people were believed to have originated, was an owl. Their terrifying screech and nocturnal behaviour would have fit perfectly the perception of abnormality in ritual and magic, hence they are most likely associated with the spiritual world. This pair of pottery owl containers is unusual in its highly naturalistic rendering of the birds. A pair of owl jars, closely comparable in glaze and form, was unearthed at Jiyuan, Henan province in 1969 and is now in the collection of the Henan Museum (fig. 1).[4] Two other related pairs of grey pottery owl containers with removable heads are respectively in the Yurinkan Museum in Japan[5] and the collection of H. M. King Gustaf Adolf VI of Sweden, the latter of which was exhibited at the British Museum in 1972.[6] A further comparable brown-glazed pottery owl figure, larger in size and dated to the Eastern Han dynasty, is in the Meiyintang collection.7