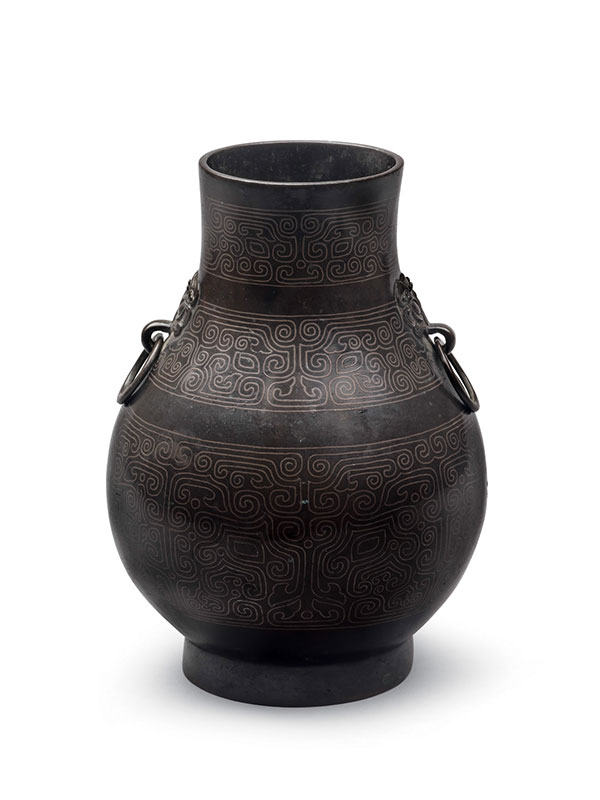 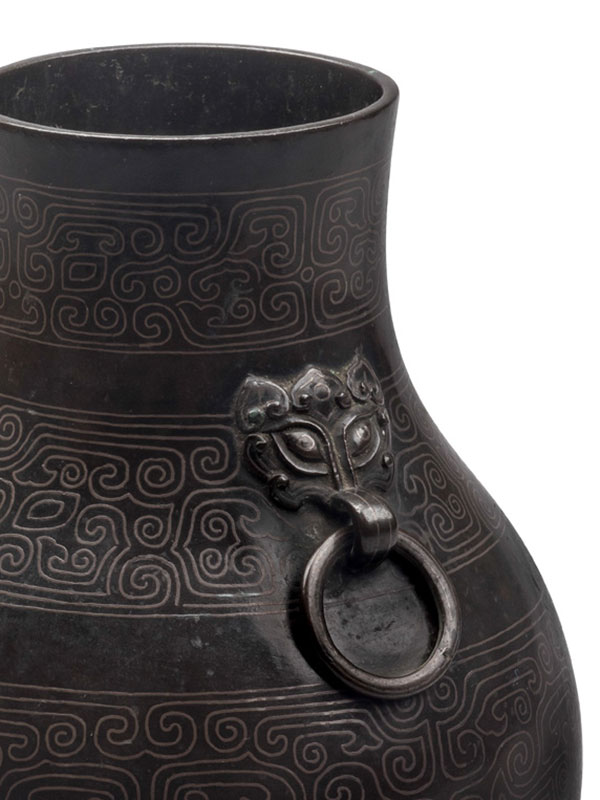 A silver-inlaid bronze vessel, hu, of baluster shape, supported on a tapered foot and flaring outwards at the neck. The body is divided into three horizontal sections by two friezes. The three sections are finely inlaid in silver wire with archaic pattern with stylised scroll and ruyi motifs. The shoulder is applied with two small ring handles issuing from taotie masks. The vessel is of even dark brown colour.

The shape of this bronze vessel derives from archaic bronze hu vessels of the Warring States period (475 – 221 BC), which have the same low-set, pear-shaped body and flaring neck. The imitation of archaic bronze vessels was popular from the Song dynasty (960 – 1279) onwards, especially those inlaid with gold and silver, as their colourful and luxurious features were much admired. In general, inlaid bronzes made from the Song to the early Ming dynasty follow the manner of their archaic prototypes by creating designs with gold and silver inlays, hammered directly into the vessel walls. Later, from the late Ming dynasty onwards, bronzes are cast in low relief and use inlays of gold and silver merely to ornament the relief elements, as is the case with the present example.[1] Silver inlay on its own soon became fashionable; the monk Shisou is believed to have created a fresh demand for this sort of work. From his time onwards, large quantities of bronze with inlaid silver wire designs appeared, mostly bearing Shisou’s name and seal.[2] On the present vessel, the delicate inlay of the silver is of fine quality and contrasts well with the patina of the bronze. A comparable vessel of similar hu shape with two handles, with a Shisou mark on the base and dated to the 17th – 18th century, was illustrated in The Second Bronze Age: Later Chinese Metalwork.[3] A silver inlaid bronze spittoon of comparable quality and design, dated to the early Qing dynasty, was included in the 1986 exhibition Arts from the Scholar’s Studio.[4]