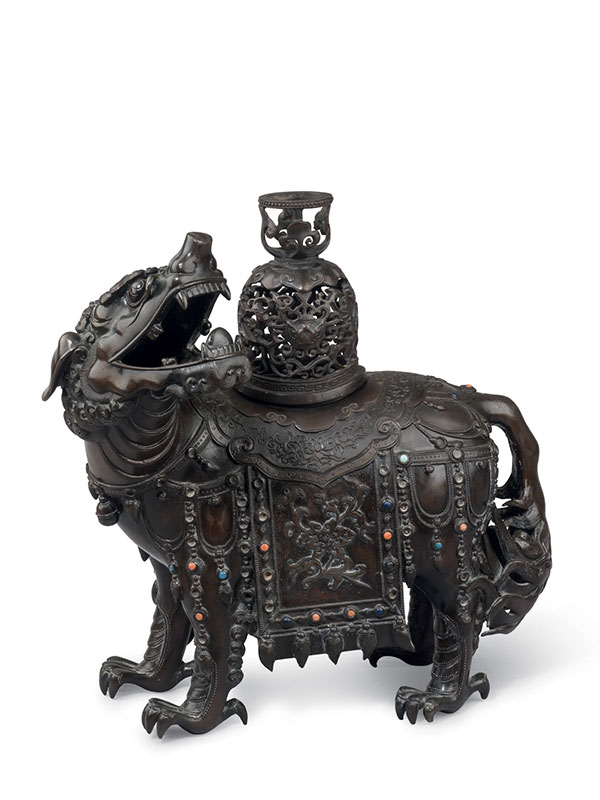 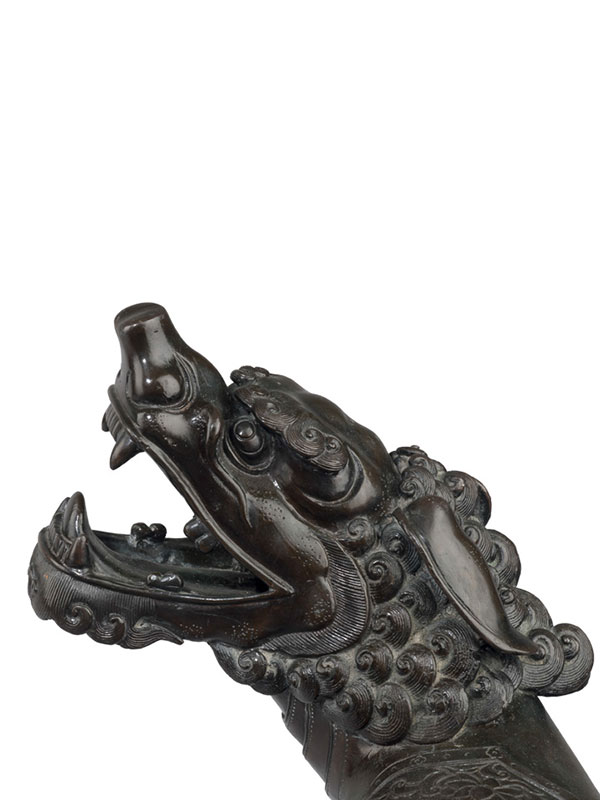 A large bronze incense burner in the form of a lion-like mythical animal, standing foursquare with its head turned up towards the sky. The animal’s back is adorned with a howdah, engraved with lotus flowers and richly attired with caparisons composed of ‘jewelled’ straps and tassels. Some of the fittings are inlaid with semi-precious stones, such as coral and lapis lazuli. The animal’s four limbs are strongly positioned, and its claws, hairy mane and bushy tails are all minutely defined. The separately cast, openwork cover takes the form of a bell and is decorated with a stylised ruyi cloud pattern, and further topped with an openwork, bowl-shaped knob. The vessel has acquired a dark brown patina.

This powerful and exquisite bronze incense burner is cast in the lost wax technique to ensure intricate details. Lions (shi in Chinese) were not indigenous to China, but were sent to the Han court by emissaries from Central Asia and Persia as tribute gifts via the Silk Road as early as 87 AD; they later became known as ‘protectors of Buddhism’ and were associated with royalty.[1] The majestic stone or bronze lions guarding the entrances to official buildings and residences in China are usually depicted in pairs.[2] The hollow body and the openwork cover suggest that this bronze vessel was designed as an incense burner, whilst the shape and the size of its top knob indicates that it might also be used as a candle holder. A bronze censer in the form of a lion-dog, dated to the 18th century and comparable in size and form, is in the collection of the British Museum.[3] Another smaller gilded bronze incense holder in the shape of a lion is in the same collection.[4] A closely comparably large bronze incense burner in the form of a lion and rider, dated to the late Ming dynasty, was formerly in the Water, Pine and Stone Retreat collection.[5]