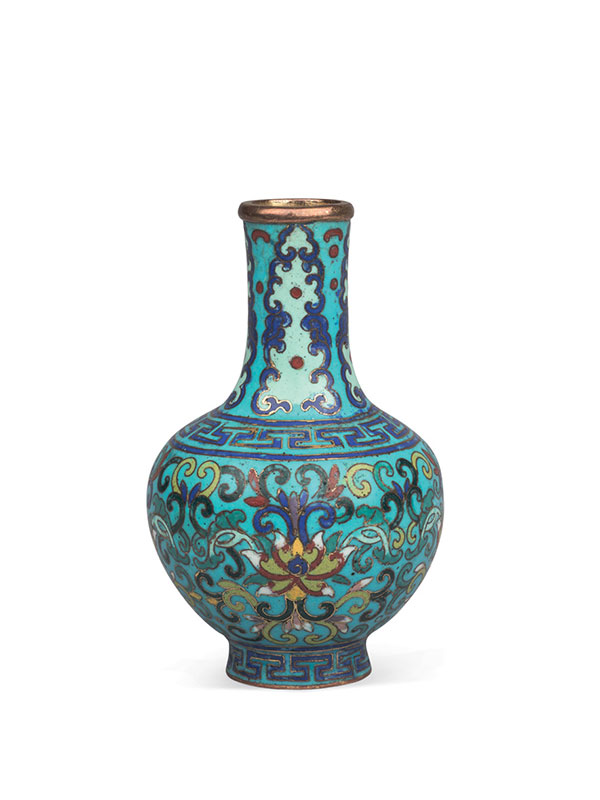 A small cloisonné enamel bottle vase of baluster form. The rounded body is supported on a splayed foot, narrows down at the shoulder and flares out towards a lipped rim. The body is decorated in coloured enamels on a turquoise ground with a frieze of scrolling lotus flowers to the main part of the body, which is framed on either side by linked key frets in lapis lazuli enamel. The long neck is decorated with four elongated cartouches, each made up from a simplified kui dragon pattern.

The form of this exquisite small cloisonné enamel vase is loosely based on that of an archaic bronze vessel. By the mid-Qing dynasty, Chinese craftsmen fully exploited the cloisonné technique to create vibrantly coloured wares. Circular cloisonné enamel vases of this small size are commonly used for holding incense tools, forming part of the ‘Three Friends of Incense’ – the incense tool vase, incense burner and incense powder box. A pair of slightly larger bottle vases of comparable proportions and with lotus decoration on their bodies, dated to the first half of the 18th century, is in the Pierre Uldry collection. [1]