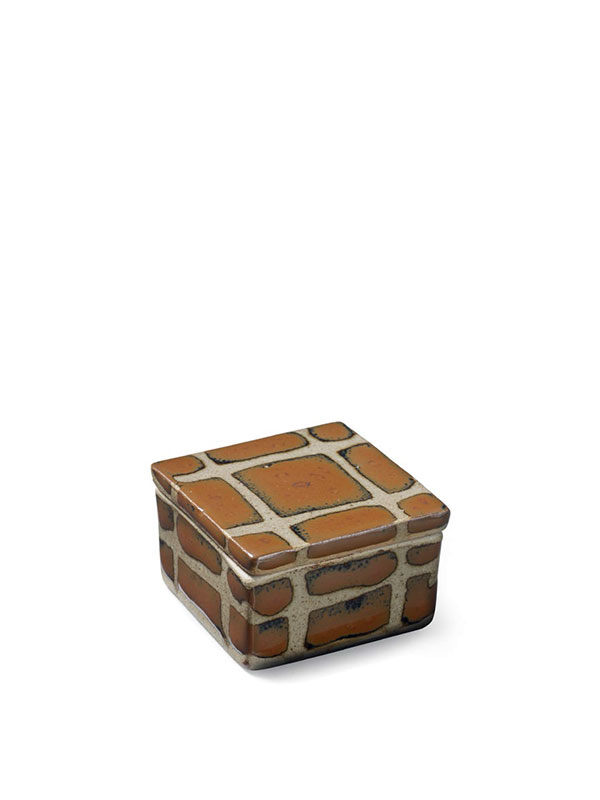 A small stoneware box of rectangular form, the exterior covered in a neatly applied brown glaze with cream slip, forming a cross or grid pattern to the flat top that extends to the straight sides. The flat base is unglazed. The box is contained within the original wood tomobako, the inside of the lid carrying the artist’s seal: Sho of Shoji and the inscription Mashiko.

Hamada Shoji (1894 – 1978) was born in Kawasaki City, Kanagawa prefecture. [1] He began to study pottery at the age of 16. He is best known in the United Kingdom for studying and working for three years with Bernard Leach in St Ives, Cornwall in the early 1920s. He returned to Japan in 1924 and opened a studio in Mashiko, Tochigi prefecture, to the northeast of Tokyo. Hamada Shoji was designated a Living National Treasure in 1955 and was awarded an Order of Cultural Merit in 1968. A large circular stoneware dish made by Hamada Shoji, similarly decorated with a cross design in cream slip, is in the National Museum of Modern Art in Kyoto. [2] A bottle with facetted sides made by him is in the Victoria and Albert Museum, London. [3]