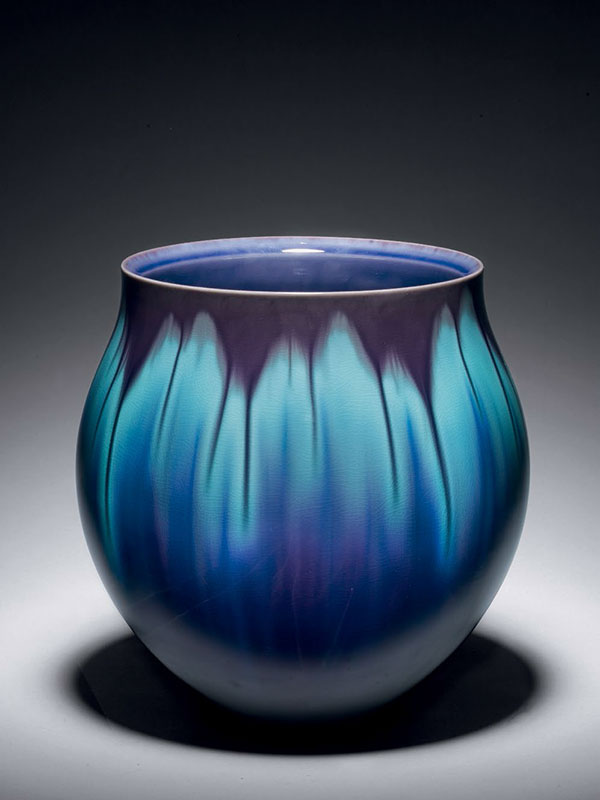 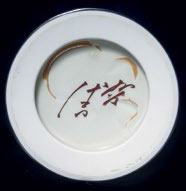 A porcelain vase of tulip shape, the rounded sides rising from a circular foot and flaring outwards towards the rim. The exterior is covered in a carefully controlled applied glaze consisting of purple and turquoise colours, with the purple neatly draining in streams from the rim. The interior is similarly covered in turquoise and purple glazes. The recessed base is painted in red with the signature of Tokuda Yasokichi III. Contained within the original tomobako, inscribed with the signature of the artist.

Tokuda was born in 1933 in Ishigawa prefecture, the eldest son of the famous potter Tokuda Yasokichi II (1907 – 1997). [1] He learned potting from his father and grandfather. Typical of his work is the technique of carefully applied coloured glazes (saiyu jiki), the effect of which is true to the traditional aesthetics of Kutani wares, but also looks modern and is memorable. In 1963 Tokuda Yasokichi III exhibited both at the Asahi Ceramics exhibition and the Nitten. Since 1975 he has mainly exhibited at the Japan Traditional Crafts exhibitions. He has received many prestigious awards, such as the NHK Chairman’s prize, the Excellence Award and the Outstanding Award from the Japanese Crafts Association. He was designated a Living National Treasure in1997. Examples of his work are in many museums, including the National Museum of Modern Art in Tokyo [2], and the Victoria and Albert Museum in London. [3]