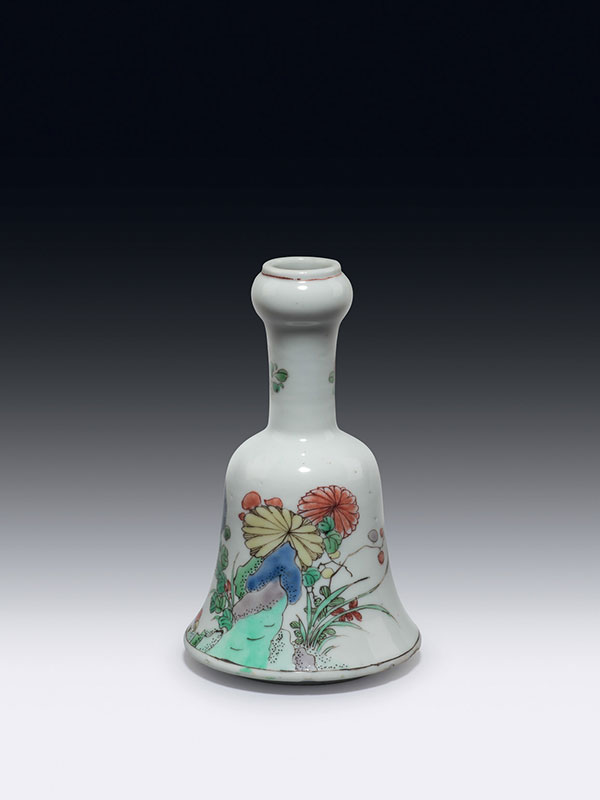 A famille verte porcelain vase, the body in the form of a bell with a slightly flared lower rim, supported on a short foot. The body extends towards a straight neck and terminates into a bulbous, garlic-head mouth with lipped rim. The body is decorated with rocks, floral motifs and a butterfly in the famille verte palette of overglaze enamels in green, blue, yellow and aubergine, highlighted with red pigment. A double-circle in underglaze blue is in the middle of the base. The vase is glazed overall, leaving only the foot rim unglazed and revealing the fine white porcelain body.

The term famille verte was coined by the porcelain collector Albert Jacquemart in the 19th century and describes wares decorated in polychrome colours where different shades of green enamel dominate. It was developed during the Ming dynasty from multi-coloured decorations with translucent enamels, which were applied during the secondary firing on glazed porcelain. Famille verte wares were made largely during the Kangxi period of the Qing dynasty. The present example of a more simplified design is rare among the famille verte wares. A comparable porcelain famille verte bowl, similarly decorated with butterflies and flowers and in a comparable colour palette, was made in Jingdezhen during the Kangxi period (1661 – 1722) and is in the collection of the Victoria and Albert Museum.[1]