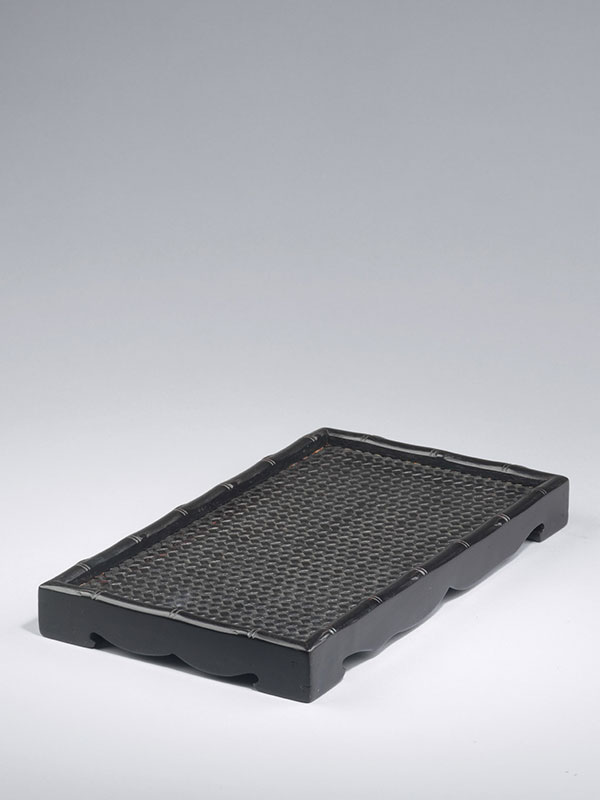 A zitan tray of rectangular form, framed by four carved lengths of wood joined together. The surface is carved with a dense woven design in low relief. The straight sides form the beaded railings, carved in low relief with bamboo nodes and leaves, and terminating into a curvy foot. The wood is well polished, and the zitan displays the typical purplish hue with characteristic minute silvery streaks.

This fine example of a scholar’s piece is made of precious wood, zitan (‘purple sandalwood’). Stationery trays, also known as scholar’s trays (ducheng pan in Chinese) were used to present a variety of utensils on a scholar’s desk, to organise objects necessary for brushwork, so they could easily be moved together. They were also used partly for the purpose of display.[1] Scholar’s objects, including brush rests, brushes, small waterpots and washers, ink cakes and stones could all be assembled with the help of such trays in an orderly fashion. Examples of stationery trays are in the Qing Court collection: a bamboo-veneered tray together with a set of writing materials is now in the collection of the Palace Museum, Beijing.[2]   Two published zitan trays, both dated to the 18th to 19th century, are comparable to the present example in size and openwork side railings: one was included in the 1986 exhibition Arts from the Scholar’s Studio, organised by the Oriental Ceramic Society of Hong Kong at the Fung Ping Shan Museum, University of Hong Kong.[3]