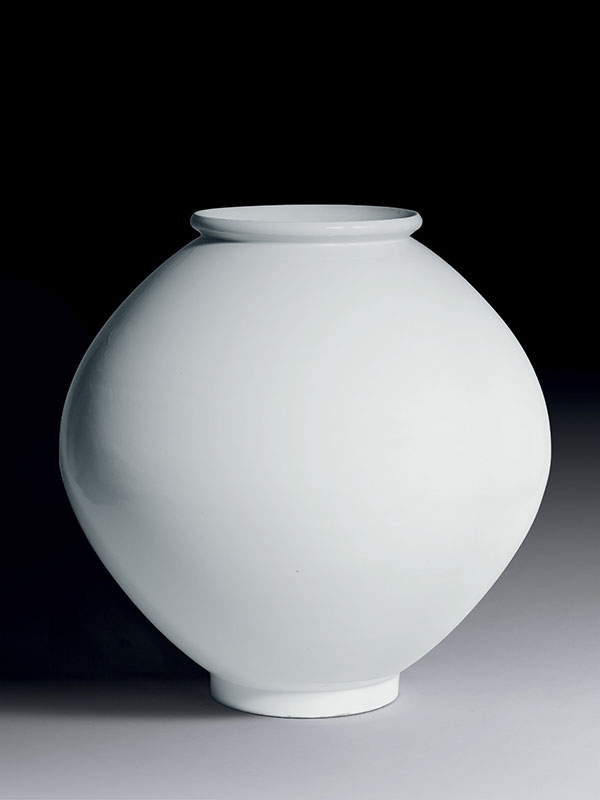 A large porcelain so-called ‘moon’ jar, the rounded sides supported on a short foot and with an everted rim. The jar is covered in a fine white glaze, showing some subtle crackling.

This beautiful white-glazed jar is based on a mid-17th to mid-18th century prototype, such as can be seen in the collection of the British Museum.[1]   ‘Moon’ jars were used for storing rice, soy sauce, alcohol and sometimes for displaying flowers. The pure simplicity of such jars has inspired the work of Western modern artists as well as modern and contemporary Korean potters. The moon-like appearance of the jar is reinforced by the milky white colour of the glaze, which has no pattern or decoration. Modern-day experiments at recreating this kind of voluminous jar testify to the great level of skill of the Joseon craftsmen; many jars would undoubtedly have failed to survive firing. Behind the moon jar’s apparent simplicity lie complex ideas and a philosophy that was prevalent throughout the more than 500-year history of the Joseon period (1392 – 1910): it embodies the principles of frugality and purity that were the major neo-Confucian ideals of literati and educated aristocracy at the time. Moon jars have a special place in the affections of Korean people. They are thought to possess qualities of magnanimity and expansiveness that set them apart from other ceramics. A very similar jar, potted by Mrs Young Sook Park (born 1946) is in the collection of the Victoria & Albert Museum, London.[2]