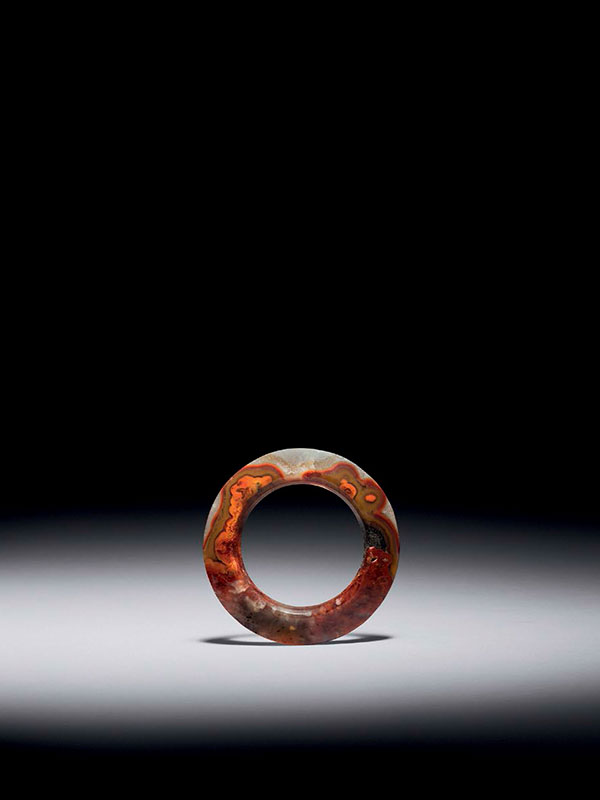 A circular agate ring, the outside edge ending in a narrow plane, whilst the inner edge is formed as four facetted planes. The mainly orange-red coloured stone is translucent in some parts, with some parallel lines in smoky brown and black tones. The surface of the stone is smooth and well polished, with some traces of calcification.

This agate ring was most probably used as a pendant, or formed part of a larger pectoral set of rings for burial. Jade pendant sets made their first appearance during the Western Zhou dynasty (c. 1046 – 771 BC) and became mature during the Warring States period (475 – 221 BC). Agate pieces grew in number among the jades of the Eastern Zhou period, often incorporated into pendant sets to add more glamour to these. A reconstruction of such a pendant set is in the Taoshi Zhai collection.1 Agate ornaments were highly valued for their exceptional durability and glossy appearance, as well as their supreme workmanship. A set of five red and white agate rings in different sizes, dated to the Warring States period, is in the Taoshi Zhai collection.2  A slightly smaller red carnelian ring of similar form and tone is in the collection of the Freer Sackler Galleries, Smithsonian Institution.3 A comparable brick-red agate bracelet, dated to the Western Han dynasty (206 BC – 8 AD), is in the collection of the Museum of East Asian Art, Bath, England.4