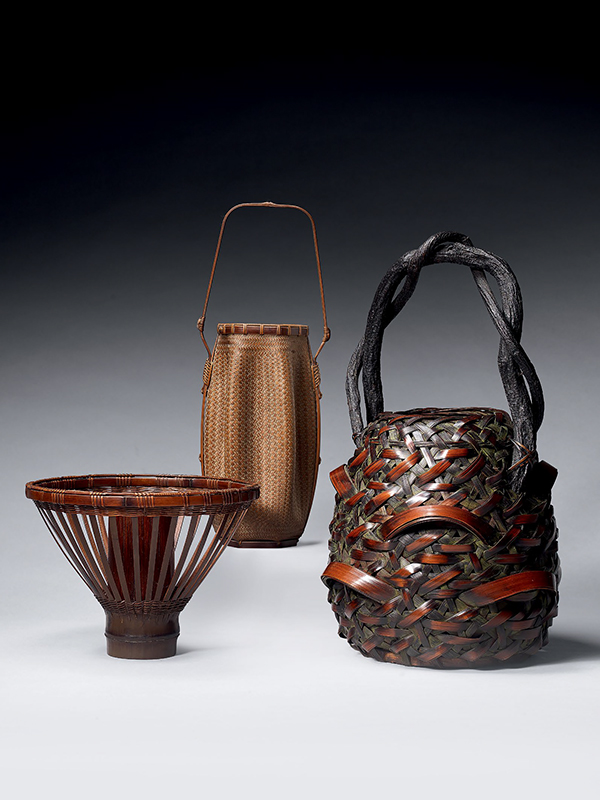 Yokota Hosai, sometimes referred to as Yokota Minesai, was born in 1899 in Matsuyama, Ehime Prefecture. He began showing his bamboo pieces at the Ministry of Commerce and Industry Exhibitions in the 1930s.  In 1955 he became one of the seventeen founding members of the Japan Bamboo Artists Association, along with Kosuge Sho¯ chikudo and Iizuka Sho¯ kansai. From 1960 to 1974, he regularly participated in the Japanese Traditional Art Crafts exhibitions. His work is in the permanent collection of the Metropolitan Museum of Art in New York.

Kosuge Ko¯ getsu was born in 1932 in Nagaoka, Niigata Prefecture. He became an apprentice to his father, Kosuge Chikudo, from the age of 18. In 1956, he received the MITI Prize at the 2nd Nihon Kaki-Chaki Bijutsu Kogei-ten exhibition. His first solo exhibition occurred in 1968.  In 1973, was given acceptance at the Nihon Dento Kogei-ten. Kogetsu became famous for his twisting bamboo (hineri-gumi) technique. A comparable flower basket by Kosuge Kogetsu can be found in the Collection of Lloyd Cotsen Japanese Bamboo at the Asian Art Museum, in San Francisco.