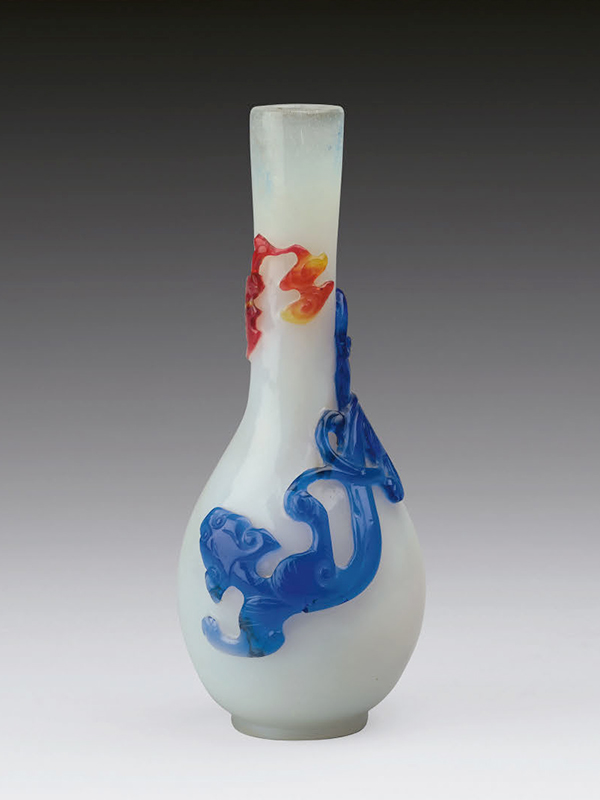 An elegant Beijing glass bottle vase, the slender pear-shaped body supported on a short, tapered foot with recessed base, the long neck terminating in a slightly splayed rim. The body is carved on the milky white ground with a bright blue serpentine chi-dragon, the neck with a bat carrying lingzhi in red and yellow.

The exquisite multi-coloured overlays on this glass vase represent one of the most successful glass making techniques developed in the Qing dynasty.  According to the Notes Written at Leisure in Yonlu, a treatise on glass by Zhao Zhiqian (published in 1880), multi-coloured overlaid glass was already made during the Kangxi period (1622 – 1722).1 Fungus (lingzhi) and bat (fu) together are a pun for ‘May your mind be clear when blessings arrive’ (fuzhi xinling).2 A closely related 18th­century translucent white glass vase decorated with bats and various fruit, is in the Walter and Phyllis Shorenstein collection.3 A comparable opaque ‘mutton-fat’ glass vase with red flames and amber -yellow chi dragons, dated to the second half of the 18th century, is in the Robert Clague Collection.4 Another white bottle vase decorated with bats dated to the Qianlong period (1736 – 1795) is in the Andrew K.F. Lee Collection.5