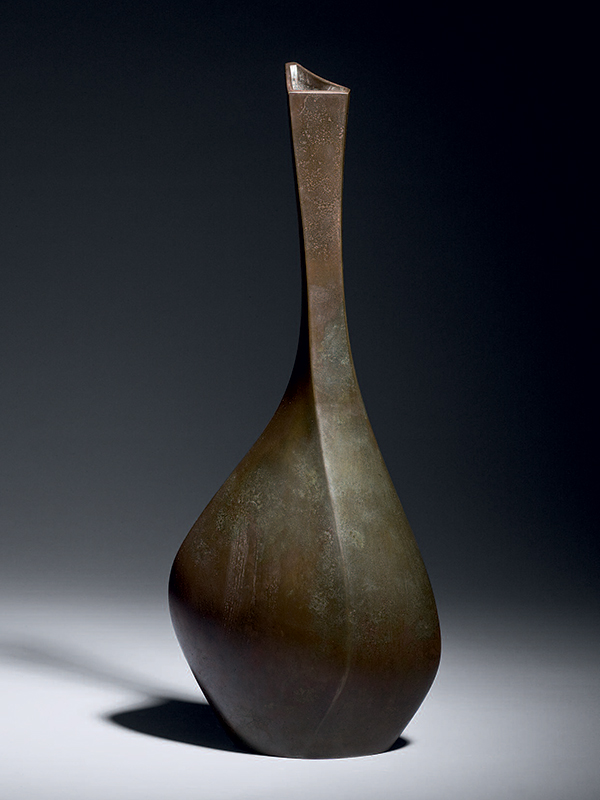 A bronze vase of bottle form, the body of oval section and shaped into four facets of uneven proportions. The long neck flares outwards and has a mouth that is higher on one side than on the other. The base is slightly recessed and is stamped with a three­-character inscription reading Shokichi-­saku (made by Shokichi). The metal has an overall chocolate patina. The original tomobako has two inscriptions, the one on the top reads Chudo hanasashi (cast bronze flower vase) and the one inside reads Kobayashi Shokichi saku with the seal Shokichi.

Shokichi was born in 1931 as the eldest  son of the metal artist Kobayashi Kazuaki. He studied metal crafting under Hara Naoki (1906­-1994), a Nitten exhibition artist and at one time president of the organization. Naoki himself studied under Katori Hozuma  (1874­ – 1954).   Shokichi was a member of the  Niigata prefecture branch of the Contemporary Art Society [Gendai kogei bijutsuka kyokai Niigata kai]. He was also a member of the Tokyo Cast Metal Artists Association [Tokyo chukin ka kyokai]. Shokichi won many awards, including at the Niigata Prefecture Sculpture Exhibition (1952 onwards), Niigata Prefecture Art Crafts Exhibition (1958  onwards) and at the Japan Contemporary Art Crafts Exhibition (1962 onwards).