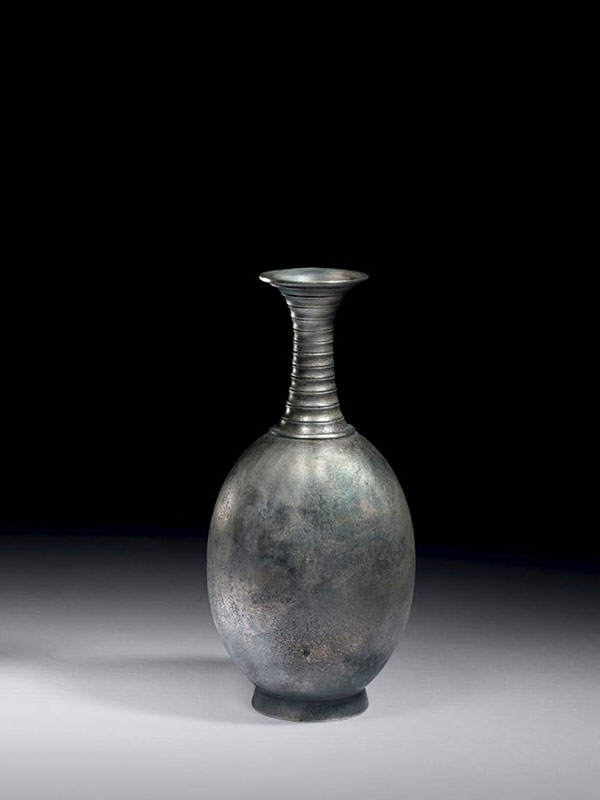 China, Northern Wei dynasty first half of the 6th century

A bronze bottle, the pear-shaped body supported on a short, slightly splayed foot. The long, ribbed neck rises from a ridge at the shoulder and terminates in a flared mouth. The metal has a silvery patina with some light green encrustation.

This elegant bronze vase has a high silver content, a very unusual material for bottles of this type.  A very similar bottle in bronze, of closely comparable size, shape and with a similar ribbed neck, was unearthed from a Northern Wei tomb in Quyang county, Hebei province in 1964.[1] This tomb, dated to 524 AD, belonged to the wife (surname Kao) of Han Hui, a Northern Wei official. From the family relationships mentioned in the mortuary inscription, it is evident that the Kao family belonged to the high Northern Wei nobility, who often intermarried with the imperial house. From the example it seems likely that vases of this type, such as the present one, belonged to Northern Wei nobility in this area. Four bronze bottles of similar shape, design and size, dated to the Southern and Northern Dynasties (420 – 589), were included in the 1999 exhibition Tin-bronze of China at the Kuboso Memorial Museum of Art in Izumi, Japan.[2] Another smaller bronze bottle of similar design and shape, dated to the Northern Wei dynasty, is in the collection of Laurence Sickman and was exhibited at the Museum of Fine Arts, Boston in 1973.[3]