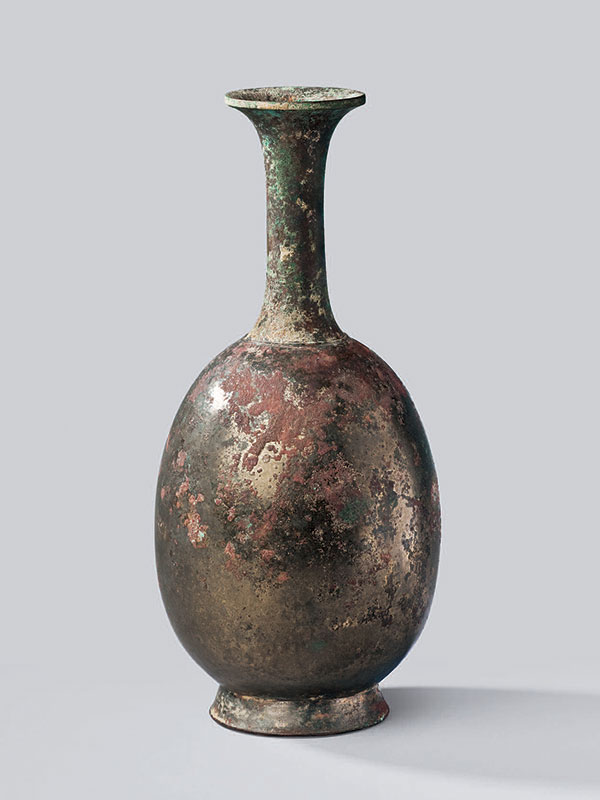 Sui or early Tang dynasty first half of the 7th century

A bronze bottle, the pear-shaped body supported on a short, splayed foot, which has a rolled edge. The long, slender neck rises from a single ridge at the shoulder and terminates in a flared mouth. The metal has a dark, silvery patina with significant areas of ruby.red and bright green encrustation.

The unadorned nature and stark simplicity of this bottle support the premise that it was made for use in a temple. The Sui dynasty, albeit relatively short in comparison to previous dynasties, marked an important period in Chinese history, since it witnessed the reunification of the country under the rule of a purely Chinese empire.[1] The fact that Buddhism was encouraged during this period is evident from the existence of this elegant bronze bottle; bottles such as this were used in Buddhist temples for ritual purposes and are said to contain the ‘elixir of life’. Sui dynasty Buddhist metal sculptures often represent Avalokitesvara holding a bottle of this shape; see for example a standing figure of Guanyin in the Metropolitan Museum of Art in New York.[2] The minimalist shape originates in metal, but was later seen also in other materials such as pottery. A closely comparable bronze bottle is in the Royal Ontario Museum in Toronto, which also holds two examples in glazed stoneware.[3] Two bronze examples of similar shape and size, respectively dated to the Southern and Northern Dynasties (420 – 589) and to the Tang dynasty, were included in the 1999 exhibition Tin-bronze of China at the Kuboso Memorial Museum of Art in Izumi, Japan.[4]