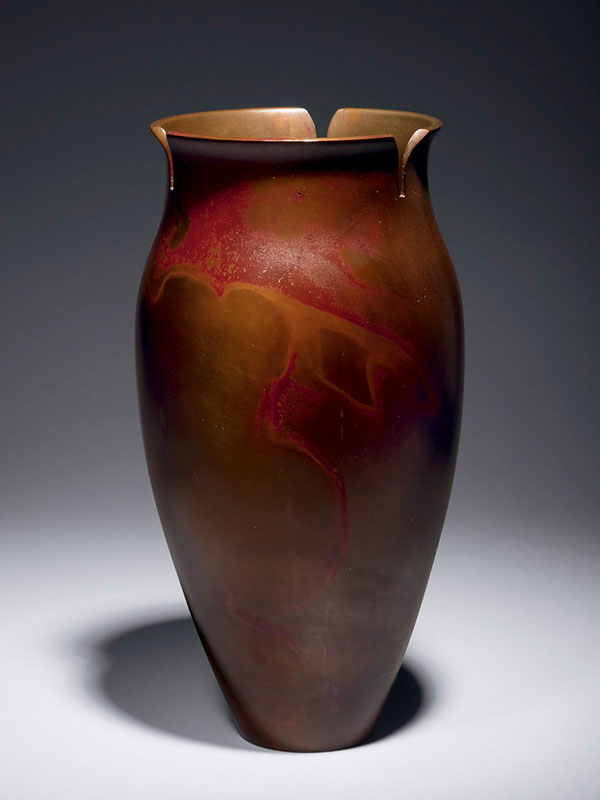 A bronze vase of baluster shape with flaring rim, which is divided into three petal shaped sections, resulting in the vase resembling a morning glory flower.  The patina is brown with characteristic red patches all over.  Signed on the base: Shozo. With the original wood tomobako, inscribed on the lid “Asagao” (morning glory flower) and on the reverse: “Shuku riji shunin, showa gojuugo-nen, ichigatsu kichijitsu, Shozo saku, with the seal Sugai.” (Made by Shozo on commission, to celebrate x’s appointment as President, an auspicious date in January, Showa 55 (1980), with the seal Sugai).

The artist Sugai Shozo was a Nitten exhibition artist. He probably started metal crafting in April of Taisho 4 (1915). Shozo specialised in the lost-wax method (rogata in Japanese), and made numerous prototype casts for various well-known artists including Shinkai Taketaro (1868 -1927). He worked in Yamagata Prefecture at the Nishimura Metal Studio (Yamagata City) during circa 1963– 1972. He was a regular exhibitor at the Japan Traditional Art Crafts Exhibition (Nihon Dento ko geiten) and received several awards. In 1951 (Showa 26), he exhibited at the 7th Nitten exhibition.