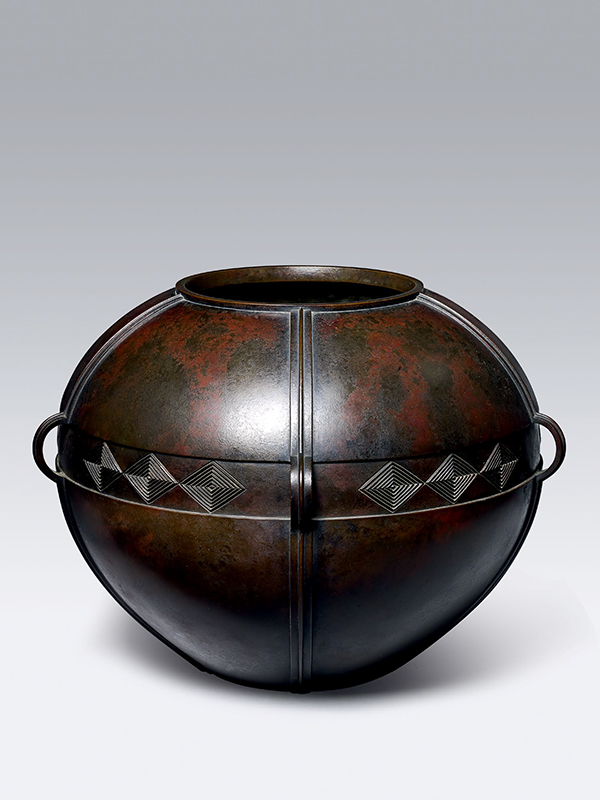 A bronze vase of spherical form, divided into four sections by vertical lines.  The centre is decorated with a band that shows linked diamond shapes in relief. The centre is applied with four C-shaped handles. The vase is covered in a pleasant dark brown patina with some red highlights.  The slightly recessed base is signed with the signature of the maker: Jiro. It retains the original wood storage box, tomobako, which is inscribed: ‘Chukin, hanaike, Jiro saku’ (Cast bronze, flower vessel, made by Jiro) with seal ‘Jiro chu in’ (Cast and seal of Jiro).

Yamamoto Jiro (1897-1954) was born into a metal crafting family that dates back to the 16th century. Jiro was taught by his family and also studied traditional seal carving (Tenkoku in Japanese) with Nashioka Sogaku. In 1930 Yamamoto Jiro joined the Nanoka-kai group (‘Seven Days Group’) that was established by Katoti Hotsuma (1874- 1954).  In 1934 Yamamoto Jiro was awarded by the Ministry of Commerce and Industry for his metal art and regularly exhibited at the Nitten exhibitions, where he won a special award (tokusen), exemplifying the fusion of tradition with modernity. He was appointed a judge at the Japan Art Association (Nihon Bijutsu Kyokai). In his later years he resided at the Senami Spa area, in Niigata prefecture. Many of his works are in the collection at the Niigata Prefecture Museum of Modern Art.