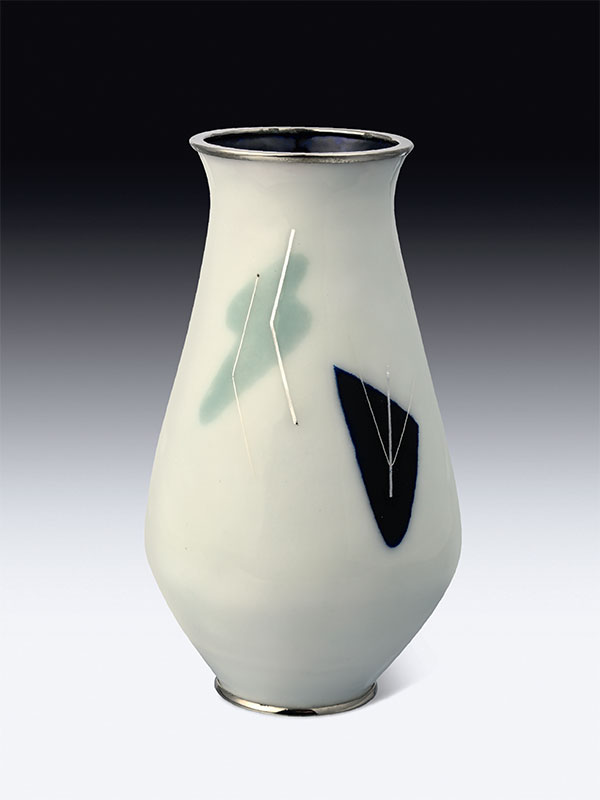 A cloisonné enamel vase of baluster shape, supported on a small foot rim. One side of the vase is inlaid with two leaf-forms, one of triangular shape, the other shaped as two adjoining cloud scrolls, in black and green enamel on a white ground. The leaves are further enhanced by mother-of pearl inlaid lines. The rims at the top and at the bottom are bound in plain silver bands. The interior and the base are covered in a layer of blue enamel. The vase is contained within the original tomobako, the top of which is in scribed Shippo kabin (cloisonné flower vase) and Takayuki saku (made by Takayuki) with the seal of the artist.

Akita Takayuki graduated from the Nagoya Kogei Gakko (Nagoya City Industrial Arts High School). He exhibited at the Nika-ten,the Chubi-ten and the Chubu Nihon Kogei-ten (The central Japan arts crafts exhibition), where he won prizes for his work. The vase comes with an accompanying leaflet, which states that, according to the Ando Shippo Workshop archive, Akita Takayuki together with Ando Jubei developed the technique of applying alumite, an alloy of obsidian, iron and aluminium, to cloisonné, thus creating a warmer feel to the material. They registered this technique as a patent in Showa 12 (1937).