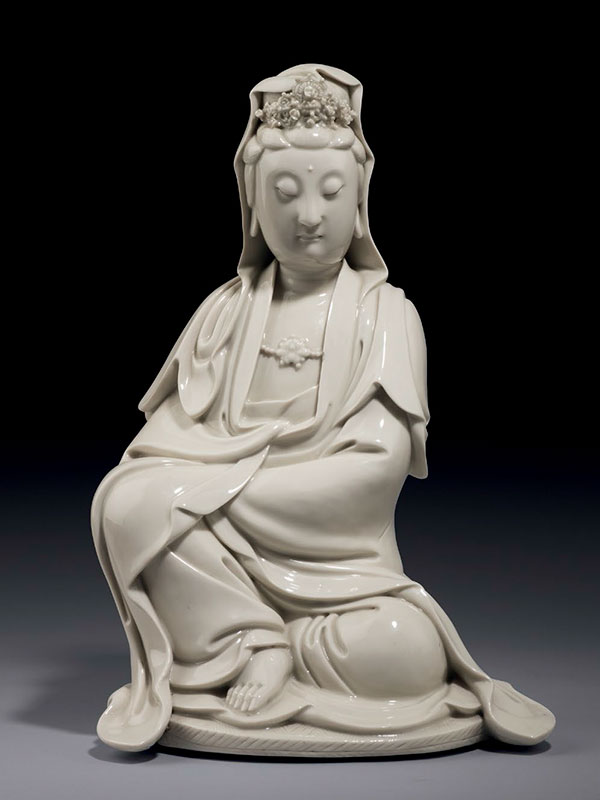 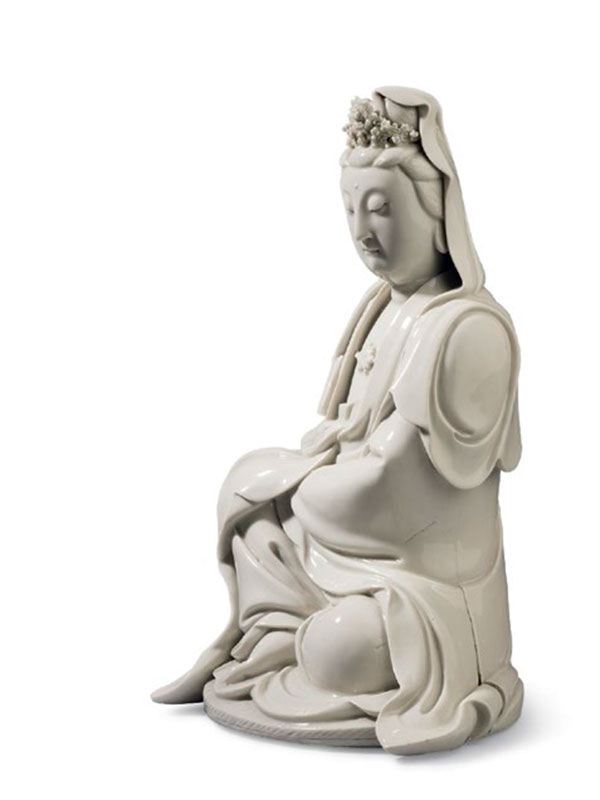 A blanc-de-chine porcelain figure of Guanyin, seated on an imitation woven circular mat in ‘royal ease’ position. Her body is dressed in loosely fitting robes that fall open at the chest, revealing a lotus-shaped pendant and leaving only her right foot uncovered. Both of her hands, hidden in the folds of her dress, rest on her drawn-up right knee. The head is slightly lowered, and a jewelled crown is placed on her neatly arranged hair in a high chignon, all covered by a cowl. Her finely carved face has a demure, benign expression with downcast eyes, firmly closed lips, elongated ears and an urna placed in the middle of the forehead. The figure is moulded in different sections. The exterior is fully covered by a white glaze with blueish hue, leaving only the base rim and the interior uncovered, revealing the fine creamy white porcelain body. A four-character seal mark is impressed on the middle of her back.

Guanyin is the bodhisattva associated with compassion as venerated by East Asian Buddhists, usually as a female. It is generally accepted among East Asian adherents that Guanyin originated as the Sanskrit Avalokitesvara, which is her male form. As the most popular deity in the Buddhist pantheon, she has become one of the favorite figures during the Ming and Qing dynasties and is often depicted in so-called blanc-de-Chine porcelain made at the Dehua kilns in Fujian province. Blanc-de-chine figures of such large size and good detail are extremely rare.  Examples in comparable sizes are known, with some minute differences in detail. Two Ming dynasty blanc-de-chine Guanyin figures, each seated in similar royal ease position on a circular mat but wearing a less elaborate headdress under a cowl, are respectively in the collections of the Palace Museum, Beijing,1 and the Nelson-Atkins Museum of Art.2  These two figures are both attributed to He Chaozong, a celebrated early 17th century Chinese potter.  A closely comparable Dehua figure of Guanyin, smaller in size and impressed with the mark of He Chaozong, was exhibited in Hong Kong in 1992.3  Two other examples are dated later to the Qing dynasty.  One dated to the 17th century is in the collection of the Museé Guimet: she is seated in meditation position on a woven mat with both hands and feet covered under the robes, wearing a closely comparable jewelled crown under a cowl, and a lotus-shaped pendant on her exposed chest.4 The other figure seated in royal ease position and with both hands revealed, dated to the 18th century, is in the collection of the British Museum.5