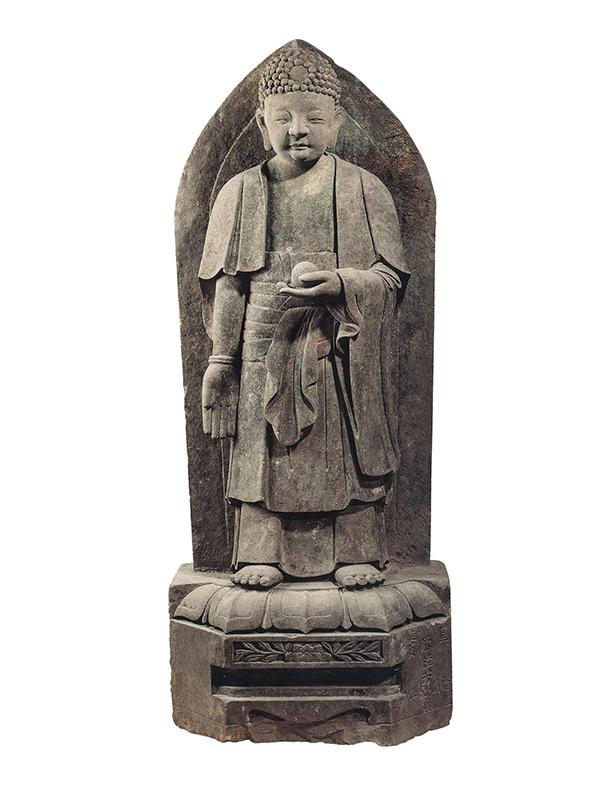 A massive grey stone sculpture of Buddha, standing on a tiered base, which consists of a row of lotus petals that is in turn supported on a hexagonal base with a rectangular recessed panel carved with a lotus flower and foliage.  Behind the figure is a full-length, flame-shaped mandorla. The Buddha is dressed in loose-fitting, layered robes, open at the chest, and gathered at the front with a broad sash.  In his left hand, held before him, he clutches a large pearl. The right arm is stretched out alongside the body, with palm facing forward.  Two bangles adorn the wrist.  The dome-shaped head has rows of tightly rolled curls and a unisa, the third eye of spiritual vision, at the front.  The face has hooded eyes, a broad nose and ears with long earlobes.  The back of the sculpture is inscribed ‘21st year of the Jiaqing period of the great Qing’, as well as three further inscriptions reading ‘Five Buddhas standing together’, ‘Guanyin Hall’ and the donor’s name Li Guifang. On the base at the front is a further inscription, recording the donor’s details.  The stone retains some traces of red and green pigment.

The inscription on the base at the front records the name of the donor, Li Guifang, and his professional status, Shan Zhu, or ‘Clerk to the Mountain Chief’, as well as two further names, Pang [Lan] and Zhang Ren Shi, most probably representing Li Guifang’s wife and concubine. The inscription Guanyin Hall on the back of the sculpture presumably refers to a chamber in which this statue was intended to reside, evidently in the company of four further sculptures of the Buddha, according to another inscription. Although this Buddha was clearly made to be displayed indoors, its massive bulk, formal pose and idealised features have much in common with the type of impressive stone sculptures of humans and animals that line so-called ‘Spirit Roads’ leading to tombs of emperors in North China. Watson illustrates two such figures.1