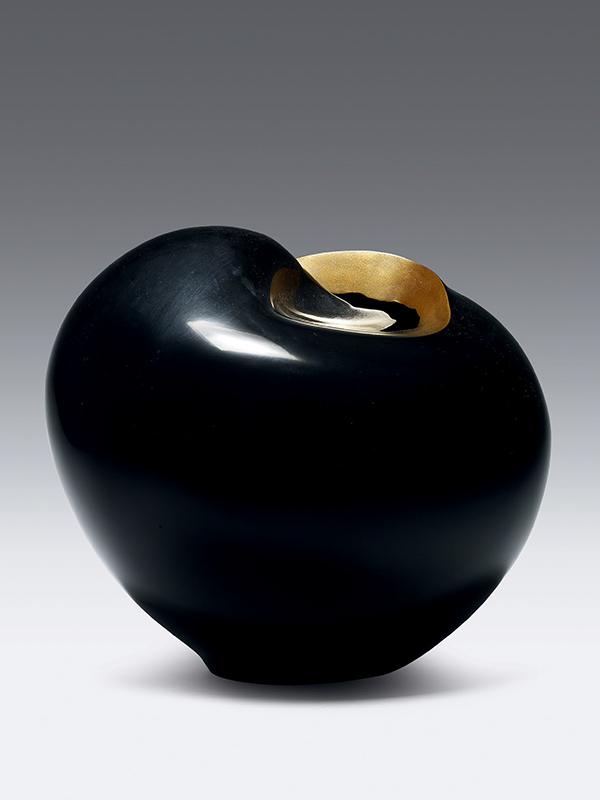 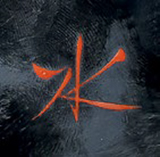 A dry lacquer wood vase of rounded form, with an irregular opening at the top that appears as a ‘crack’.  The vase is covered in black lacquer, with the exception of the rim, which is lacquered in gold. The vase is signed on the base: Mizu (or Mizutani). It retains its original wood storage box, tomobako, which is inscribed: ‘Kanshitsu, Yo, Mizutani Masa’ (dry lacquer work, entitled ‘Swing’, by Mizutani Masa).

“Dry” lacquer (kanshitsu) is a technique of Japanese sculpture and decorative arts in which a figure or vessel is fashioned with many layers of hemp cloth soaked with lacquer. Vessels are always made using the hollow kanshitsu method. The leaflet that accompanies this intriguing vase informs us that this work was exhibited at the Nitten in Showa 57 (1982), and was gifted from the artist to a Mr Matsunaga Hideo, who was appointed chairman of the Miyama Town Culture Association, Nakazato Nakazato ward, Mie prefecture.