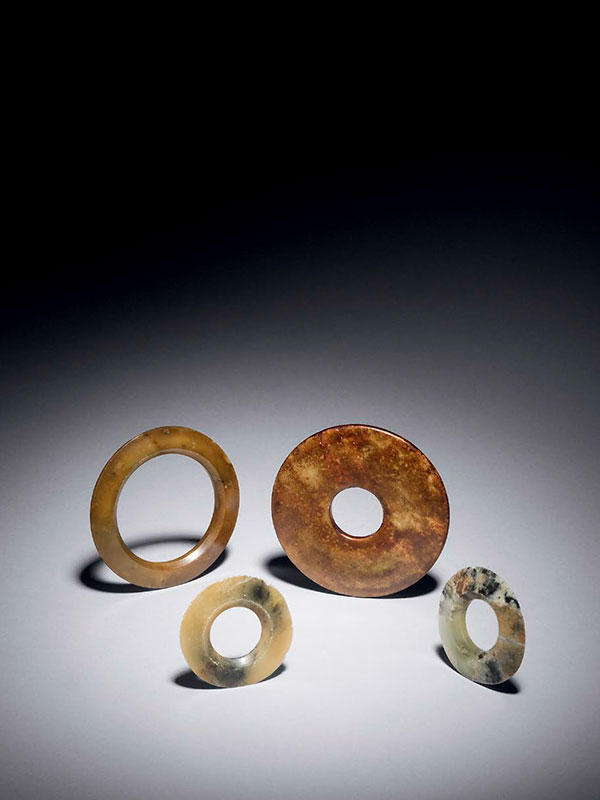 Four circular hardstone discs, each with a round hole cut to the centre, leaving apertures of varying widths.  The largest jade bi disc has flattened surfaces; the stone is of rust-brown tone. The inner edges of the three agate rings are formed as two facetted planes, with their surfaces gradually terminating into pointed outer edges. The stones are translucent in some parts, respectively in brown, yellow and celadon colours with some areas in smoky brown and black tone. All the surfaces have been smoothly polished, with some traces of calcification.

The jade disc, which has a small aperture in proportion to the overall diameter, is known as a bi. It is unusually small and may have been worn as a pendant. Two small jade bi-discs, of similar size and closely comparable in size and proportions, are dated to the late Shang or Western Zhou dynasty (c. 11th – 8th century BC) and are in the collection of the National Palace Museum, Taipei.1 The three agate discs of different sizes and colours probably formed part of larger pectoral sets. Some examples of agate discs, of comparable colours and proportions, dated to the Eastern Zhou dynasty, Warring States period (475 – 221 BC), are respectively in the collection of the Palace Museum, Beijing 2 and the Taoshi Zhai collection.3   Some agate discs were excavated from the tomb of King Cuo of the State of Zhongshan of the Warring States period in 1977.4