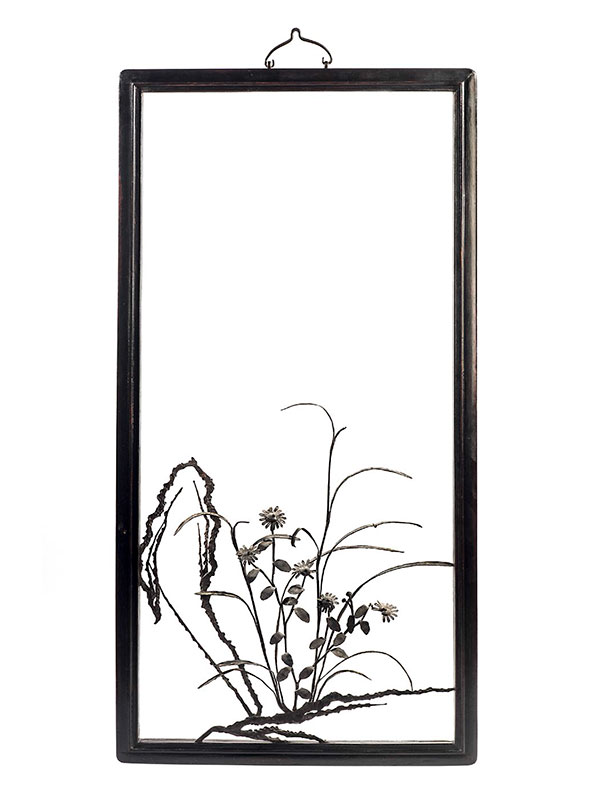 An iron painting depicting branches of flowering daisies, issuing from the ground, with long, slender leaves. The plant is made of a multitude of wrought-iron elements, which are crafted individually and bolted together.  The painting is contained within a hardwood frame.

The contrast between the dark iron and the lighter background results in a striking two-dimensional quality, equivalent to ink painting. The daisy (or Bellis perennis) originated from continental Europe and later became a common plant in Chinese gardens, where it was known as chuju, literally meaning ’adolescent chrysanthemums’. As a decorative motif, the daisy appears in some export porcelain wares, such as two Kangxi period (1662 – 1722) blue-and-white dishes, which are painted with a daisy flower on each lobe.1 Stylistically, this iron painting closely resembles an example in the collection of the British Museum illustrated by Jenyns, which is dated to the 18th century and forms part of a set of four such paintings, depicting the four seasons.2 A set of four iron paintings similarly depicting flowers or plant motifs is in the John Reilly Jr. collection, illustrated in The Romance of Chinese Art. 3   Four iron paintings from the Shanghai Museum were included in the exhibition The Chinese Scholar’s Studio: Artistic Life in the Late Ming Period in 1987.4