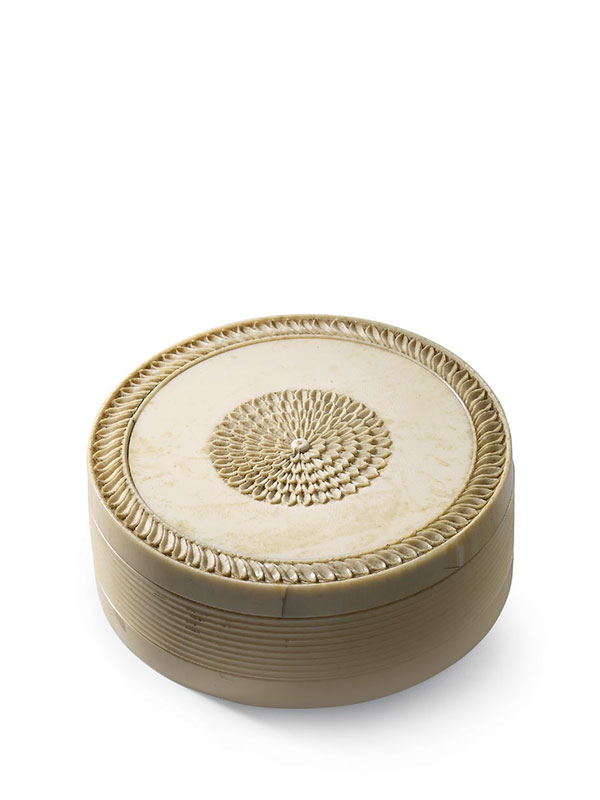 A finely carved oval ivory box.  The lid has a flat top with a central design of an elaborate flower surrounded by a smooth, undecorated surface, the outer edge is carved with a stylised repeated leaf design. The side of the lid is undecorated. The lid unscrews from the bottom part of the box, the outside of which is carved with simple bands. The inside of the box is smooth and undecorated.

Whilst most ivory carving in the area around Delhi and the Punjab in the 19th century consisted of items such as combs and bangles, made exclusively for the domestic market, Delhi and Amritsar were the only centres that produced ivory articles for the Western market, such as this finely carved round box.1   Amritsar’s carvers drew inspiration for the designs from the perforated geometric designs seen on local stone jalis. 2 Ivory carving, which was done by craftsmen of Hindu, Muslim and Sikh origin, was a hereditary profession. Apprentices would start work from early childhood, initially carving softwoods, then hardwoods, before being allowed to carve the precious ivory. The raw material originated from Burma, Nepal, Africa and India, in particular from Bombay. By the late 19th century the trade in perforated ivory work declined in Amritsar, when it was overtaken by Delhi. Two late 19th century carved ivory boxes from Amritsar are in the Victoria and Albert Museum, London.3