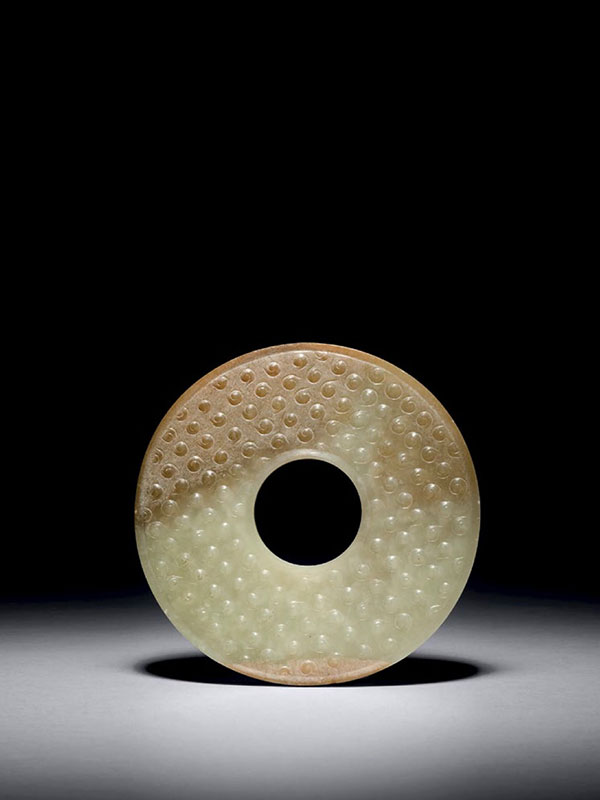 A jade bi disc of circular form with a round aperture cut in the centre. Around the inner and outer edges of the disc are two plain, raised bands. On both sides, the surface of the jade is carved in relief with a spiral ‘grain’ pattern. The stone is semi translucent and of yellowish tone, with some brown patches.

In China, a circular jade disc is known as bi. The origin and purpose of the bi disc in early Chinese art remains obscure. Circular jade objects were commonly used as ornaments from the beginning of the Spring and Autumn period (770 – 476 BC).  From the late Warring States period onwards, jade bi were no longer only used as ornaments to the human body, but also as decorations added to other objects or buildings. Medium and small jade bi (10 – 5 cm in diameter), with a grain design and perfectly rounded shape also functioned as auspicious symbols.[1]  A closely comparable bi disc of similar design and size, dated to the late Warring States period to early Western Han dynasty, is in the collection of the National Palace Museum, Taipei.[2] A similar jade bi disc was excavated from the Western Han tomb of the Nanyue King and is now in the eponymous museum in Guangzhou.[3] Another example with similar pattern from the Hotung collection is in the British Museum.[4]