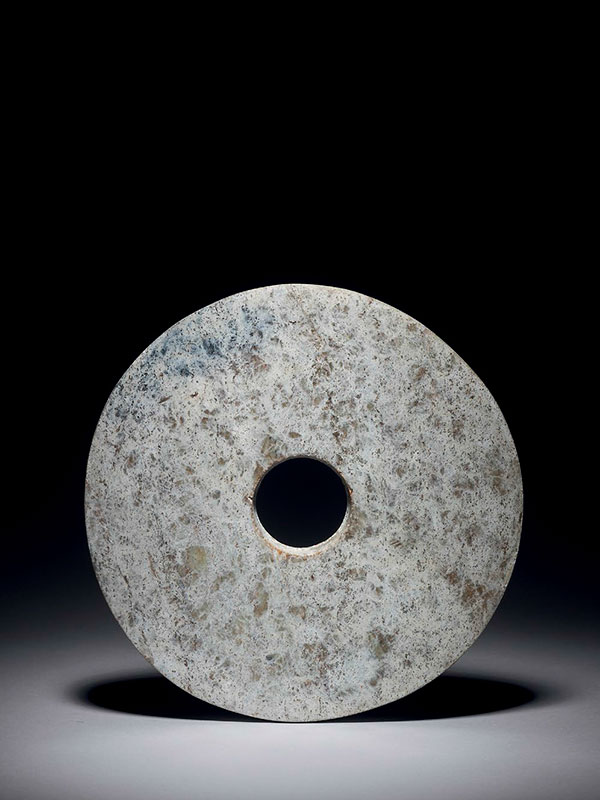 A jade bi disc of uneven thickness. Its central, circular aperture is cut from both sides, leaving a ridge in the centre and visible grinding lines to either side of it. The stone is of predominantly light greenish tone with areas of greyish inclusions all over and dark bluish patches around the edges with a few strands of white veining. Some calcified areas are visible. The disc is completely unadorned and its surface is well polished on both sides.

Jade pieces shaped as circular bi discs and their counterparts the cong tubes are generally attributed to the Liangzhu culture of the Neolithic period. While the origin and purpose of the bi disc in early Chinese art remain obscure, Eastern Zhou and Han ritual texts describe it as an offering to the Heavens. Two slightly larger jade bi discs of closely comparable colour, excavated from Yuhang city, Zhejiang province are in the collection of the Liangzhu Culture Museum.1 Another comparable jade bi disc, of slightly smaller size and also dated to the Liangzhu Culture, is in the collection of the Museum of East Asian Art, Bath, England.2 A further example of similar pale green tone is in the collection of the British Museum.3