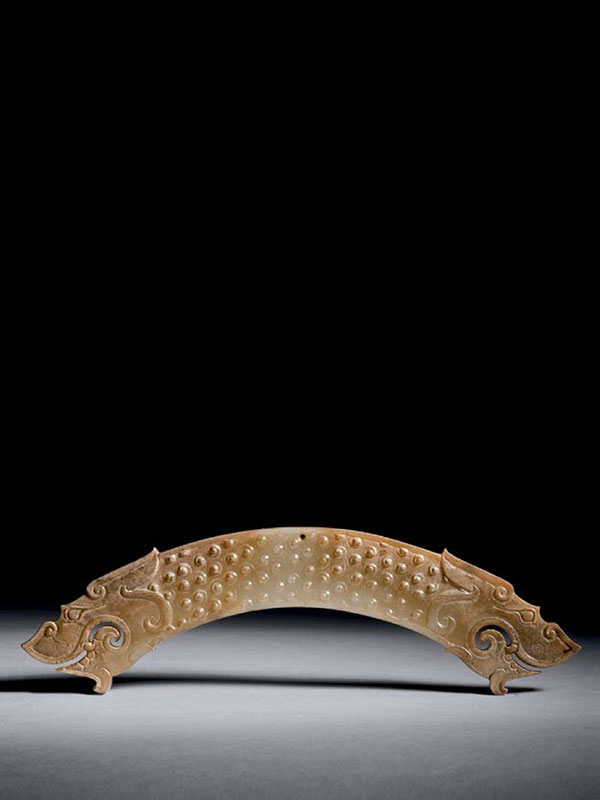 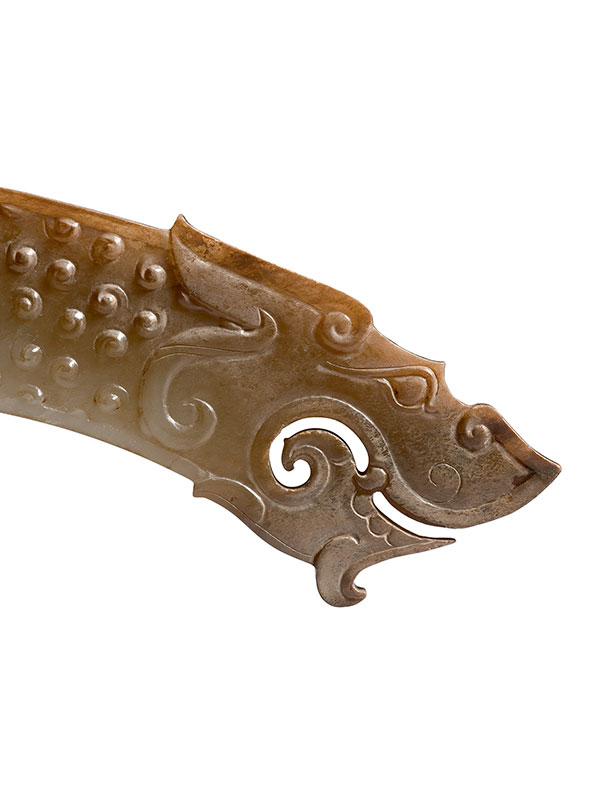 A jade pendant of arched form, huang, terminating in well-pronounced dragonheads at both ends. The dragonheads are carved with well-defined bulging eyes, prominent ears and nose, strong jaw, pointed teeth and a short beard. The huang has a narrow ridge and is covered with a raised spiral grain pattern on both sides. A small hole for suspension is drilled at the top of the arch. Two C-shaped apertures form the dragons’ mouths. The semi-translucent stone is of even, whitish tone with partially yellowish patches. 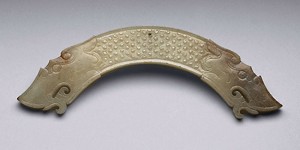 This superbly carved jade huang pendant was originally a component part of a set of pendants, strung in rows with beads and together creating a tingling sound when worn. Various such sets of jade pendants, excavated from the tomb of the King of Nanyue, are now in the eponymous museum in Guangzhou.[1] Such jade pendants were considered emblems of virtue and were recognised as a sign of rank.  As described in the Book of Rites (‘Li ji’), “when advancing, [the king or ruler] inclined forward a little; he held himself up straight; all in all these movements, the pieces of jade emitted their tinkling….and in this way evil and depraved thoughts found no entrance into his mind.”[2]  Beginning around the eighth century BC, it was fashionable for noblemen to wear such pendant sets, sometimes made up of ten or more jades of different shapes.[3]  The majority of later Eastern Zhou huang have two holes on the sides, but many have an additional hole at the top of the arc; meaning it could either be hung horizontally in an inverted U, or vertically.[4]  A closely comparable, slightly smaller jade pendant, with identical spiral grain pattern, dragonhead ends and colour of the jade, also dated to the Warring States period, is in the collection of the National Palace Museum, Taipei (fig. 1).[5]  Two slightly larger jade pendants with similar dragon head ends, comparable in proportion and in decoration were unearthed from a tomb dated to the Warring States period at Yanggong, Changfeng county, Anhui province in 1977, and are now in the collection of the Palace Museum, Beijing.[6]