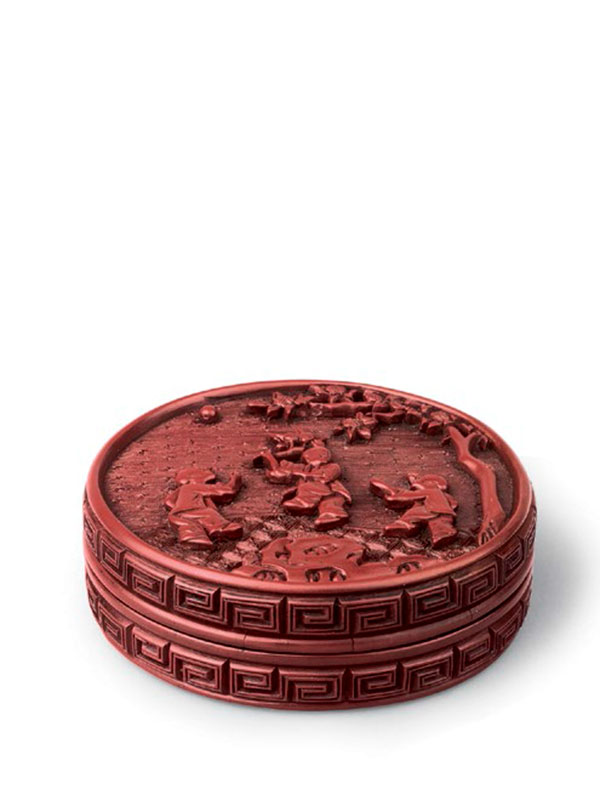 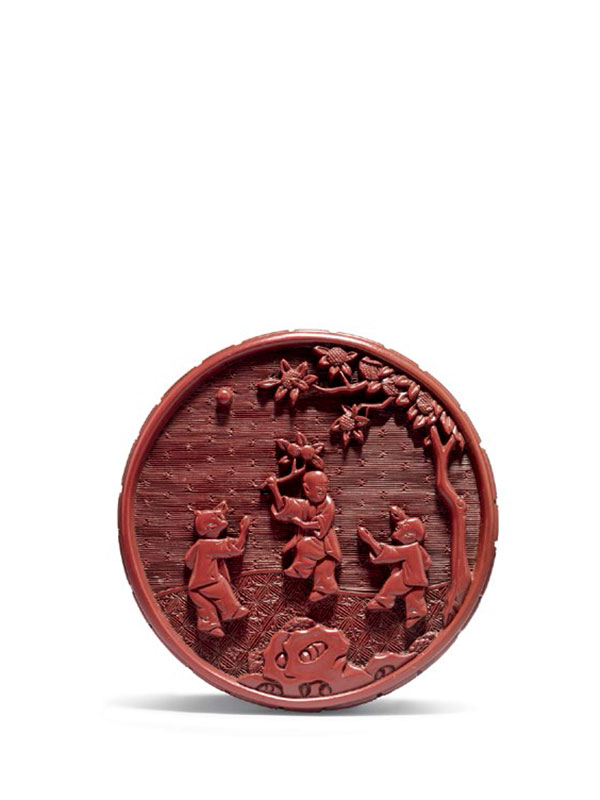 A lacquer box of circular form with straight sides. The flat top is carved through a thick layer of cinnabar lacquer and depicts three boys at play at night in a garden, surrounded by rocks, a fruiting lychee tree and a full moon in the sky.  The boy in the centre carries a branch of lychee, whilst the other two are jumping playfully around him. A continuous key-fret pattern denotes the sky, while starburst diapers decorate the ground. A double linked key-fret band runs around the sides of the box and cover. The interior and the base are lacquered black. An old collector’s label is attached to the middle of the base.

‘Boys at play’ (yingxi tu) is a popular theme in Chinese decorative arts, especially during the Ming and Qing dynasties and it typifies the Chinese desire for many sons.1  Lychee is homophonous with ‘establishing a son (lizi)’, meaning to have a son so as to continue the family name2, which further strengthens this desire. A closely comparable Ming dynasty circular lacquer box, similarly depicting three boys at play in a garden under a tree, is illustrated in a 1925 catalogue by Spink & Son Ltd.3  A carved cinnabar lacquer dish with two boys playing in a courtyard under a jujube tree, implying the same wish, and dated to the mid-Ming dynasty (late 15th – early 16th century) is in the Muwen Tang collection.4  A comparable circular box carved with a lady playing with a boy in a garden, dated to the first half of the 16th century, is in the collection of the National Palace Museum, Taipei.5 Another circular box carved with a lady bathing two children, another popular theme of the Ming period, with a comparable three-figure composition and sculptural carving, is dated to the Ming dynasty and in the collection of the Metropolitan Museum of Art.6