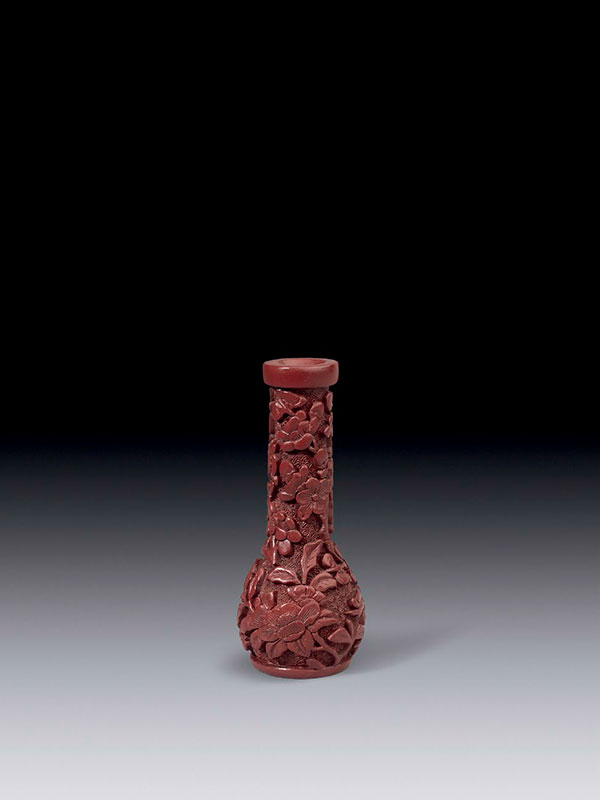 A cinnabar lacquer vase of mallet form with bulbous body and long straight neck, terminating in a lipped rim. The body and the neck are fully carved with branches of plum blossom with buds set against a background of finely carved starburst diaper. The base is lacquered in black. The vase is contained in a Japanese wooden box.

Lacquer vases are extremely rare. It is possible that this small vase served as a holder for incense sticks.  Its decoration consists of blossoms of the plum tree, which are emblematic of perseverance and purity, and also serve as a longevity symbol. Blooming on withered old branches, it is not only a welcome sight in winter but also a symbol for vigorous old age. The five petals represent the so-called Five Blessings: old age, wealth, health, love of virtue, and a natural death.1 This design is very popular on Ming lacquer pieces, and can be observed on a mid-Ming dynasty brush pot in the collection of the Palace Museum, Beijing 2 and also on two circular boxes dated to the 16th century in the collection of the National Palace Museum, Taipei . 3  A larger mallet-shaped vase decorated with carved peonies, inscribed with a Xuande mark (1426 – 1435) on the base and dated to the 16th century, is also in the collection of the National Palace Museum, Taipei.4