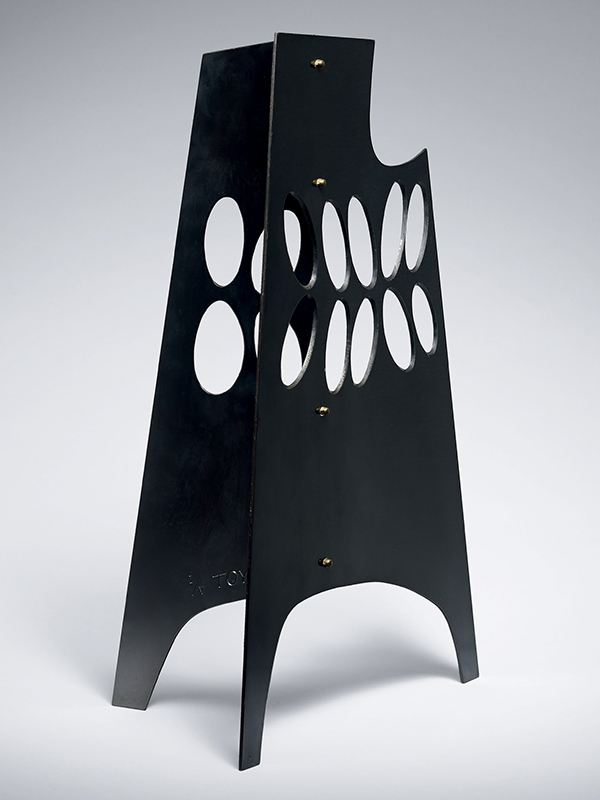 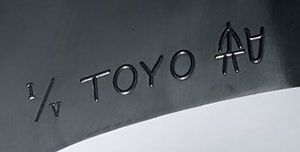 A metal sculpture, consisting of two thin, curved plates bolted together.  The two plates each have a high domed section at the bottom, creating “feet” for the sculpture to stand on. Each of the plates is pierced with a decoration of egg-shaped holes, bundled together in pairs. The sculpture is signed with the name of the artist ‘Tomo (chi)’ and the numeral 1/V.

Tomonori Toyofuku (1925 – 2019) was a sculptor known for his abstract works featuring multiple oval holes. He was born in Kurume, Fukuoka Prefecture on the island of Kiushu. Immediately after World War II he learned woodcarving under the sculptor Tominaga Chodo.  He moved to Milan in 1960 to continue his artistic career and lived there for more than 40 years. He showed many times at the Venice Biennale and his sculpture Drifting No. 2, 1959 is preserved in the collection of Peggy Guggenheim in Venice.1 After moving back to Japan in 2003, he continued to travel back and forth between Italy and his home country.  Toyofuku found a unique abstract form of expression through bronze, mahogany, and stone sculptures, piercing them with egg-shaped motifs, repeated with endless variations. His sculptures now form part of major public and private collections, including The Museum of Modern Art, New York; the National Museum of Modern Art, Tokyo; the Albright-Knox Art Gallery, Buffalo; and the Galleria d’Arte Moderna in Rome. In 1993 he was honoured by the Japanese government with the Medal with Purple Ribbon.